The United Kingdom Permanent Mission to the United Nations Office and other international organizations in Geneva joined the Geneva Environment Network for a briefing on the opportunities and challenges to addressing climate change ahead of the 26th meeting of the Conference of the Parties to the United Nations Framework Convention on Climate Change (UNFCCC COP26), to be held in Glasgow, Scotland, from 31 October to 12 November 2021.

Heads of state, negotiators, experts, and campaigners will soon gather in Glasgow at the 26th UN Climate Change Conference of the Parties (COP26) for the most consequential climate conference since the Paris Agreement. As the leading climate science body laid out in stark terms, the world is ‘dangerously close’ to running out of time to stop a climate change catastrophe.

COP26 will focus on accelerating progress towards achieving the aims of the Paris Agreement. To avoid the worst effects of climate change, countries must ramp up ambition, accelerate adaptation, increase international climate financing, and collaborate across governments, businesses, and civil society to finalise the Paris rulebook.

Speakers from various facets of the climate agenda laid out what to expect from the conference. They shared their insights on the political dynamics, negotiations, and how to take forward the progress to be made in Glasgow to the implementing arm of international climate action in Geneva. The event  also presented  one of the Earthshot Prize Finalists, which was announced on 17 October 2021.

Permanent Representative of the United Kingdom to the United Nations Office, WTO, and other international organizations in Geneva

Cofounder of Enapter, one of the winners of the Earthshot Prize 2021 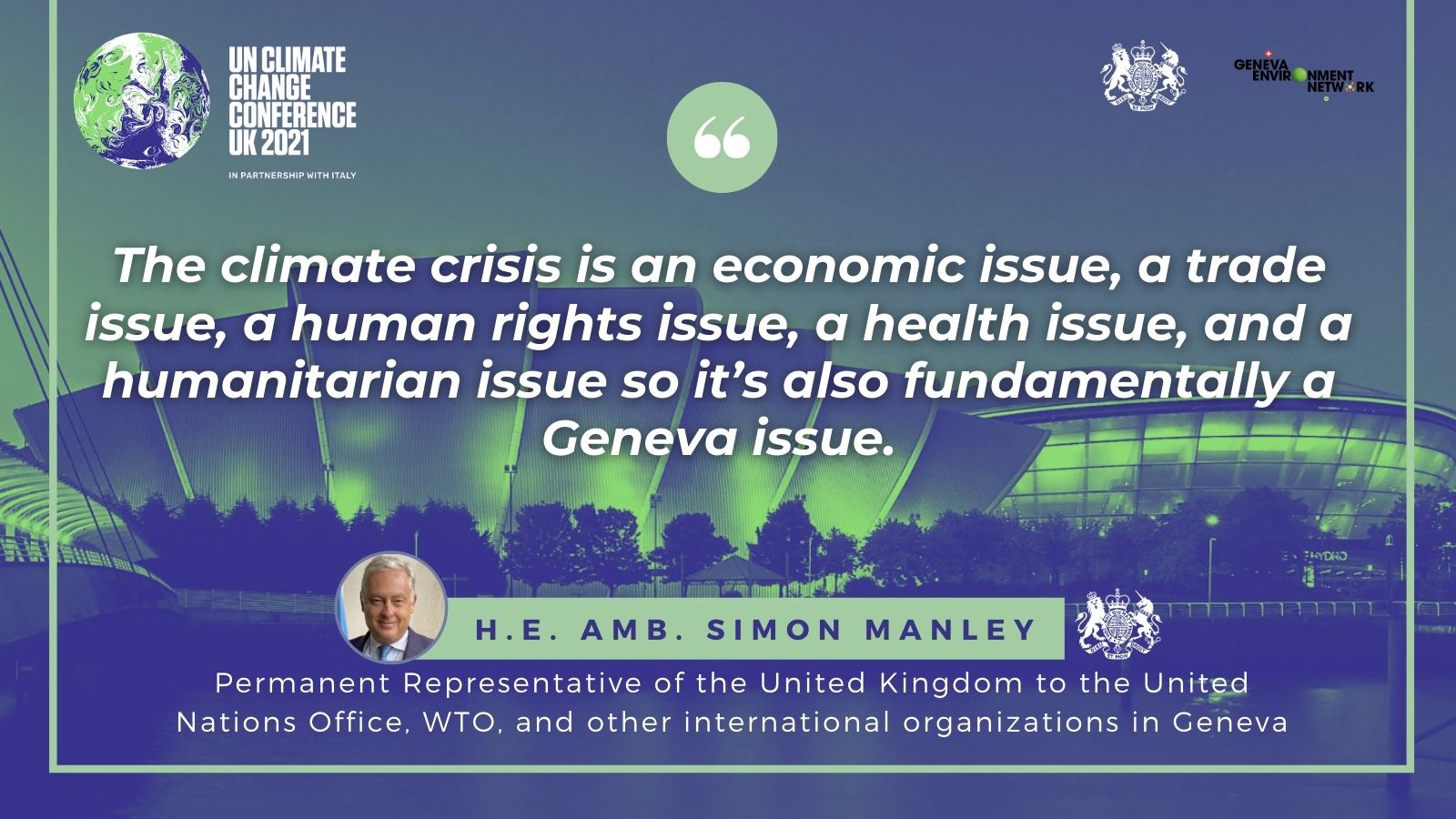 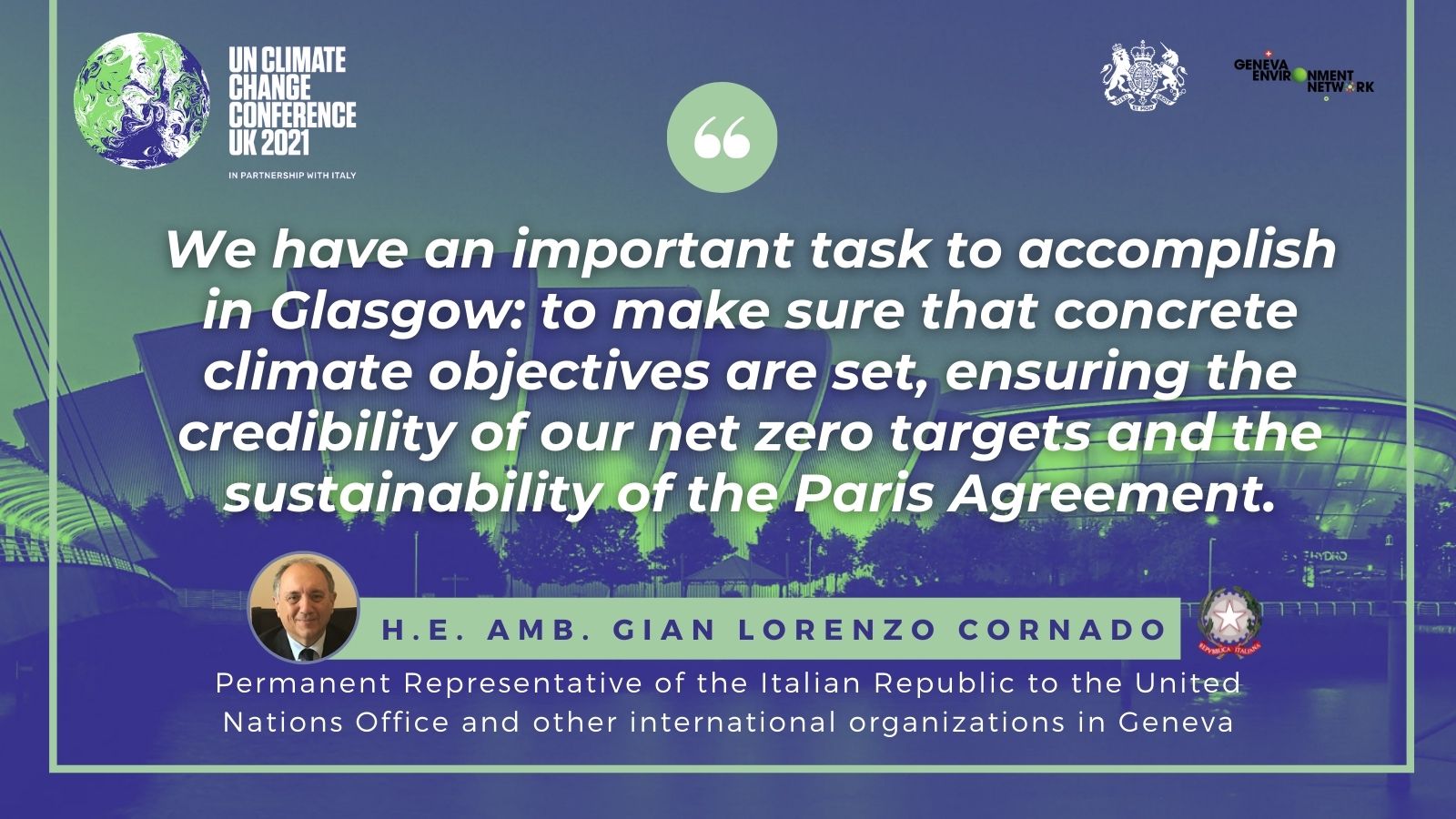 Updates from the Secretariat 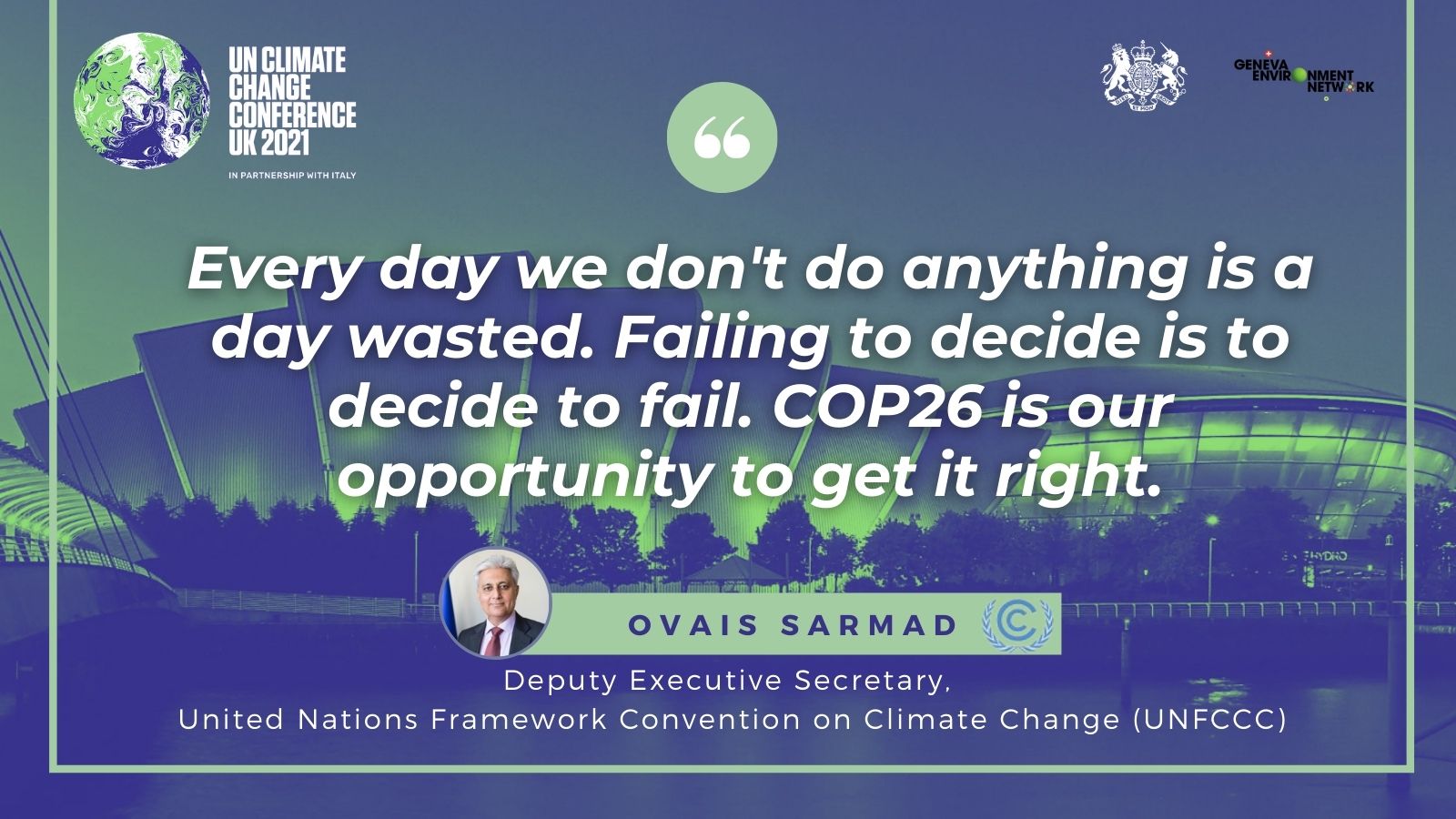 The Scientific Impetus for Action 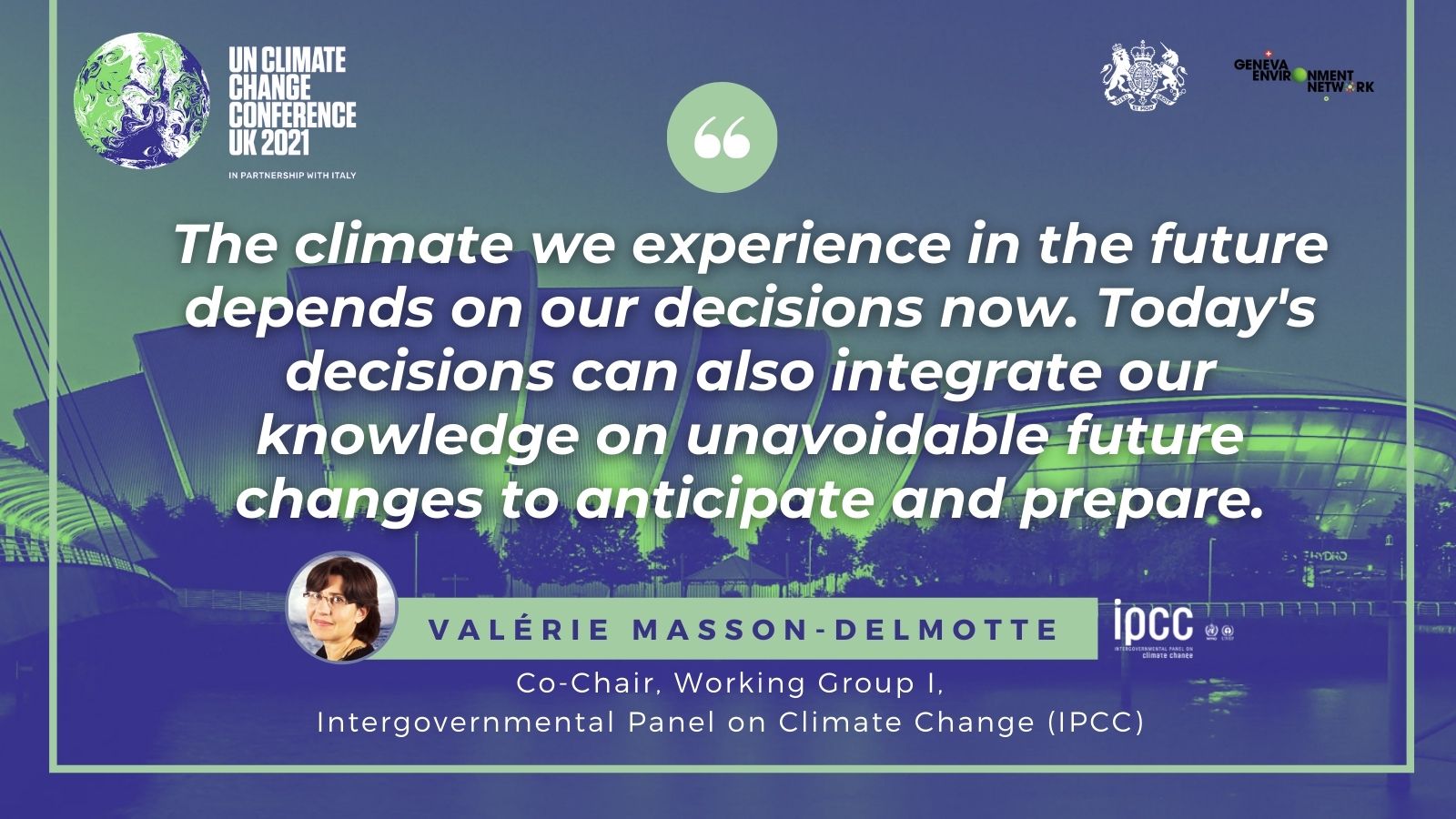 The Role of Nature 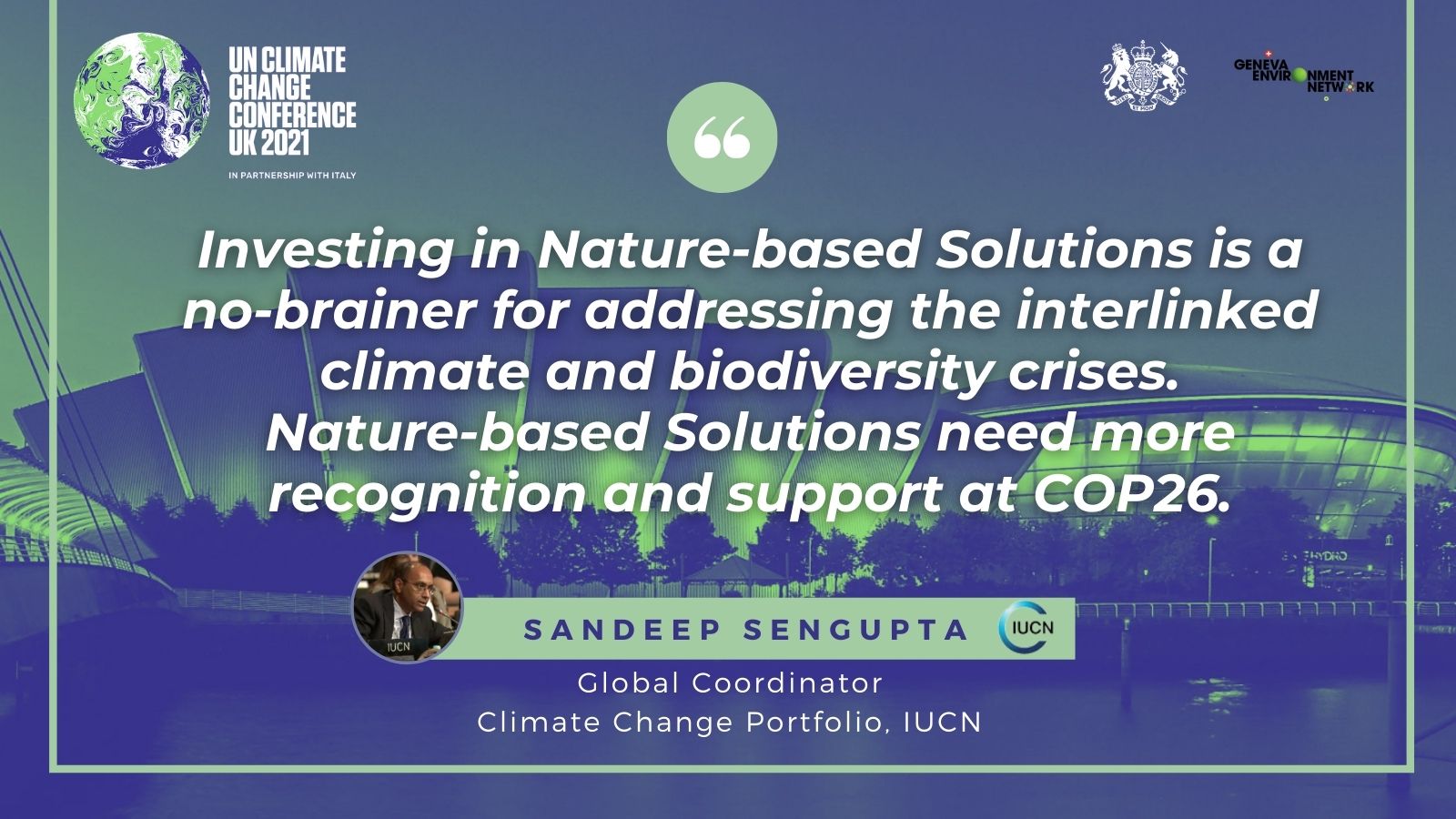 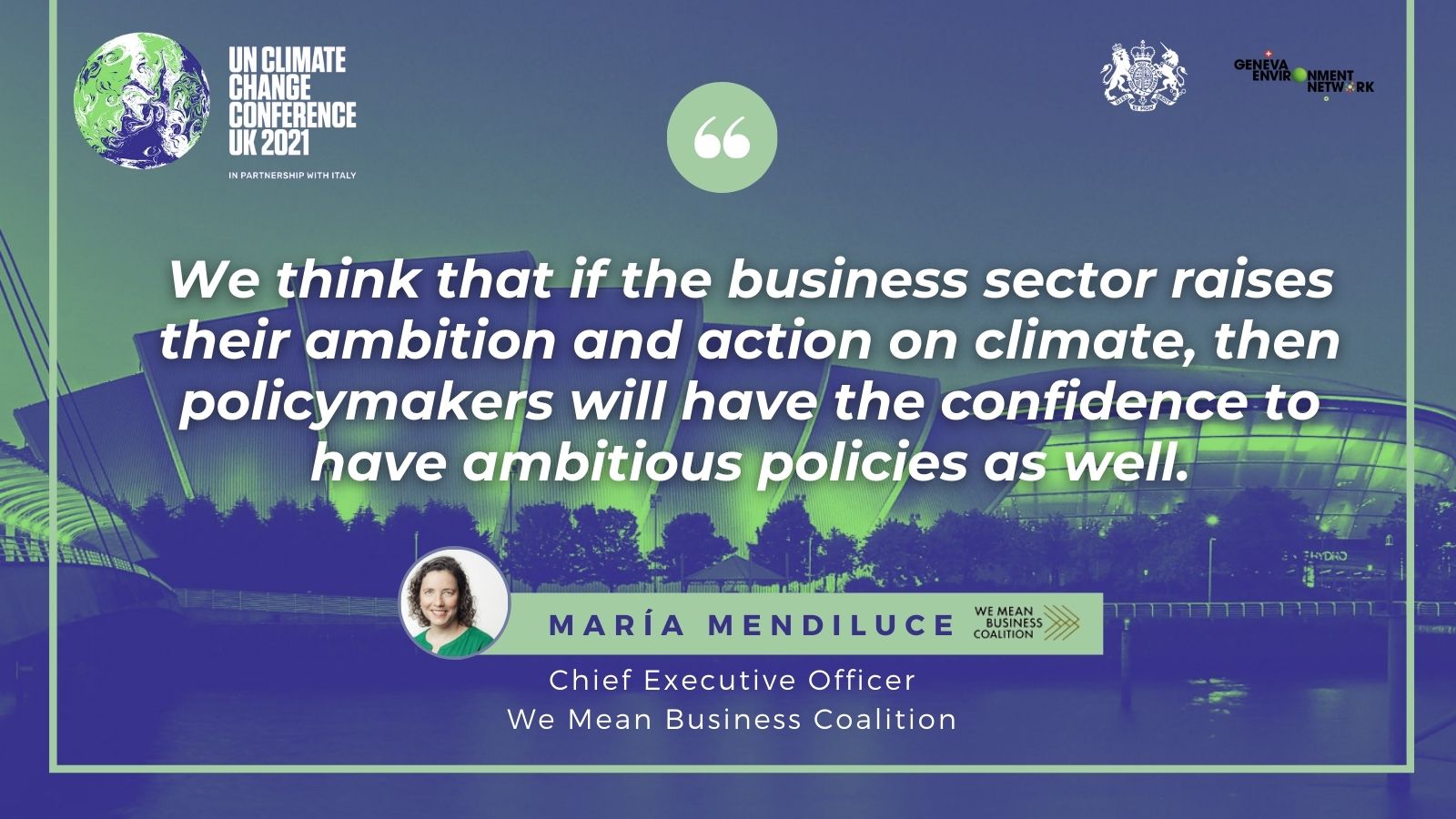 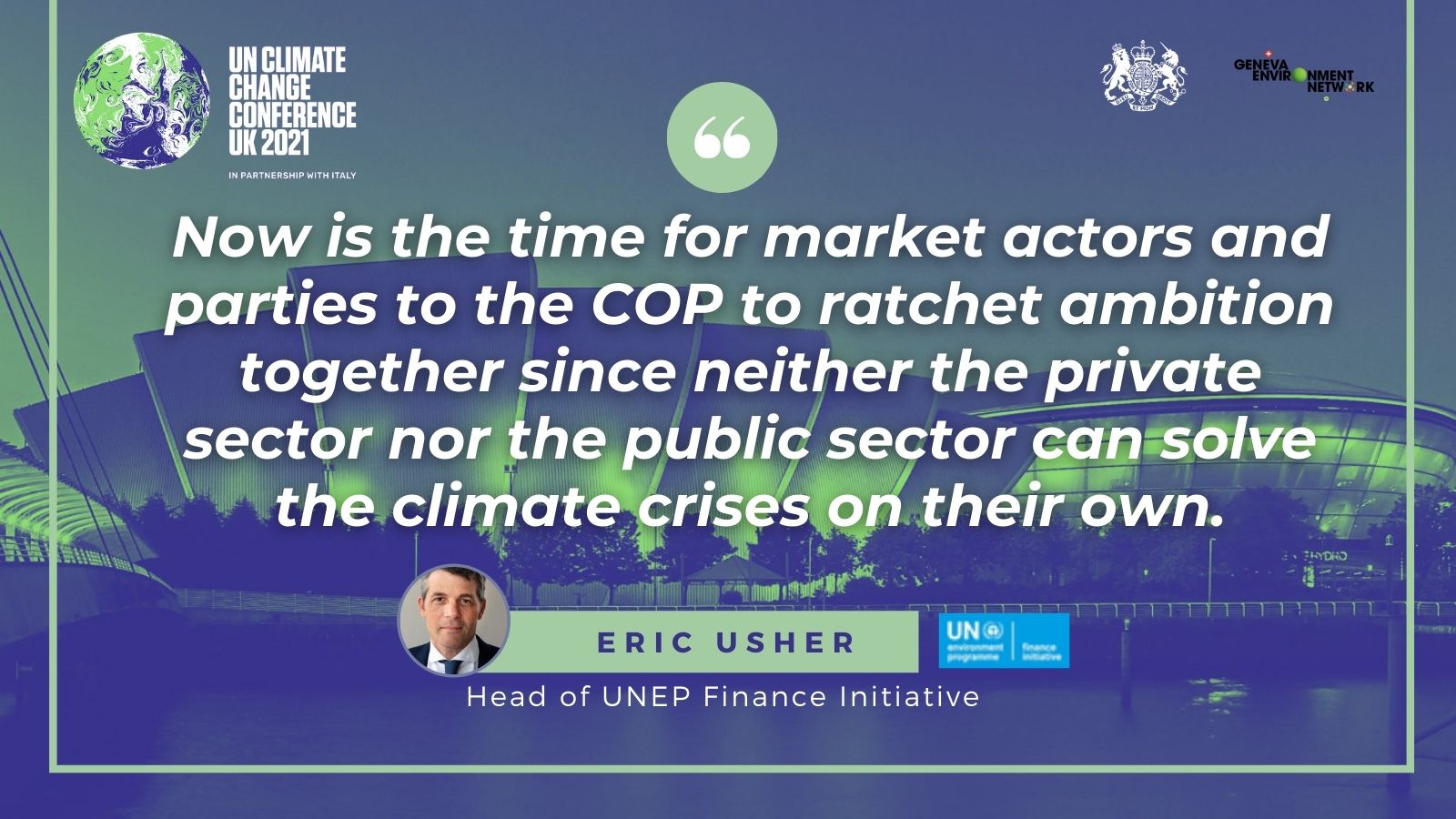 Key Expectations for COP 26 from a Civil Society Perspective 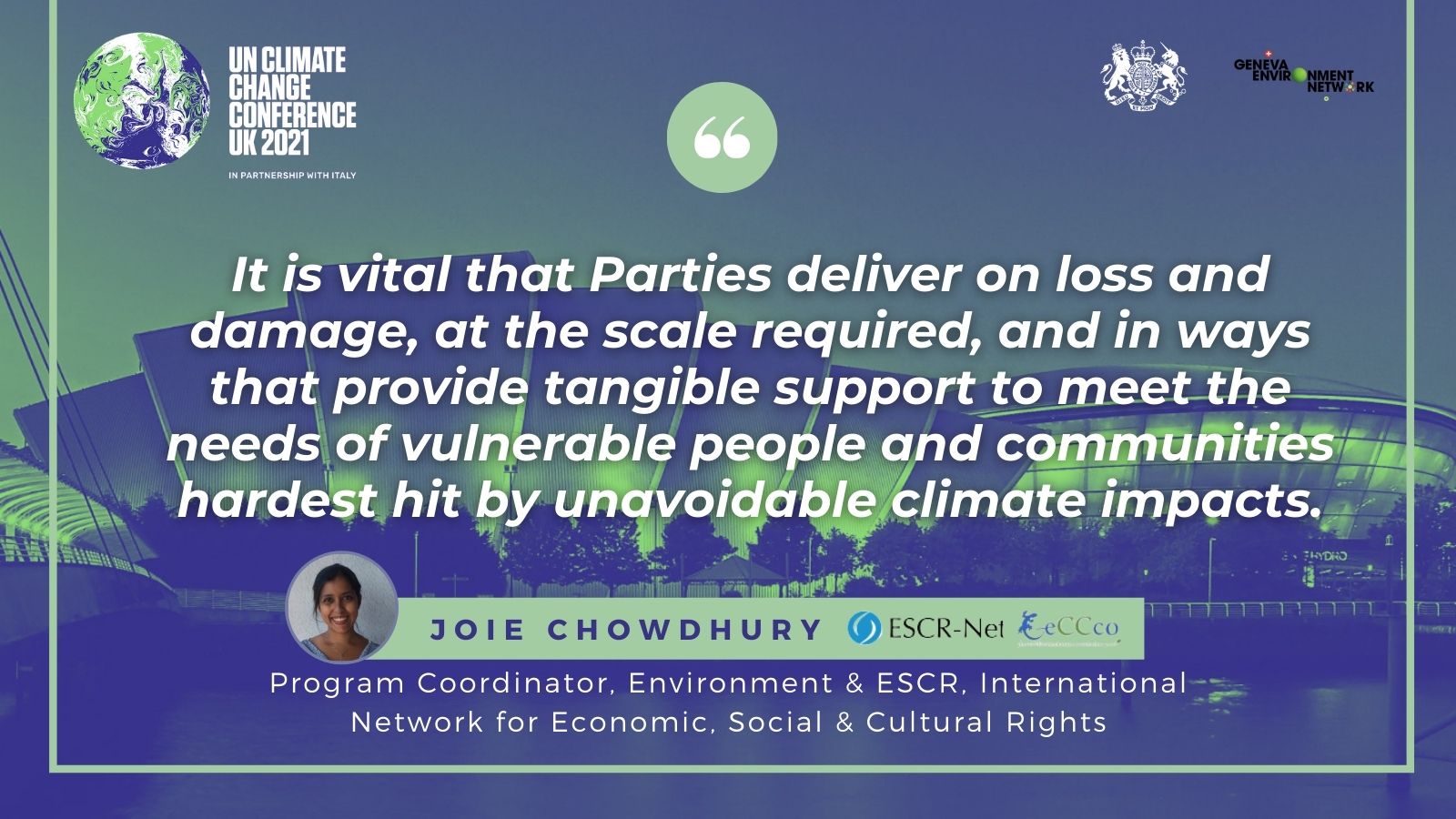 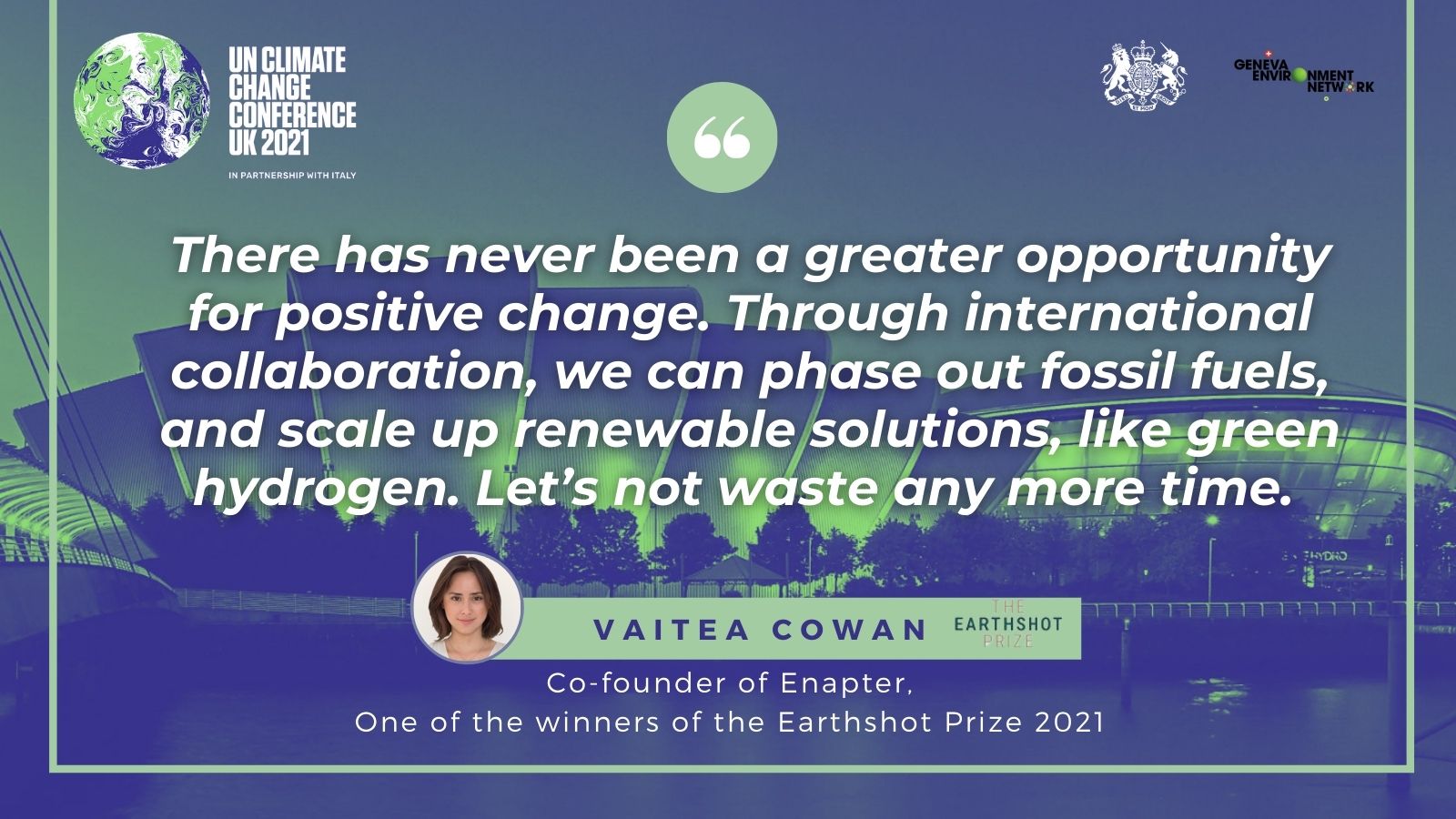 At the Venice Conference in July, it was observed that despite the growth of international agreements over the last 30 years, the rate of decarbonization has remained unchanged. How can COP26 change this very dangerous statistics and what could be the reasons behind it? Could you give us an update on how do you see the issue of loss and damage being tabled and negotiated at COP26 and how can we support you to have a good decision on loss and damage to drive that agenda forward? How do we leverage finance for loss and damage? How can COP26 recognize explicitly the challenge that we face in relation to fossil fuels and fossil fuel subsidies?

Ovais Sarmad: Reflecting on the loss and damage in the Santiago Network, that is something that is one of the unfinished businesses. It is high on the agenda and what needs to happen and how it can be helped is to provide very clear messages in terms of what are your expectations. The need for the governance of loss and damage is something that needs to be concluded. There are interlinkages with finance, with the current markets, with the transparency and reporting formats, and so on. It is very high on the agenda we are very much aware of it. Our Secretariat is working very closely with the key negotiators on the loss and damage and our colleagues in the adaptation unit are fully aware of the importance. I’m cautiously optimistic that a package of decisions will be taken at the top.

H.E. Amb. Simon Manley (UK): For decarbonization, it’s absolutely at the heart of what we’ve been trying to do at the G7 presidency over the course of this year. It’s absolutely at the heart of what we hope to achieve in Glasgow. We know what we need to do in terms of enabling the transition and we just need to do it. We’ve tried to do our bit by restricting financing of coal power stations overseas. There is a need to be inclusive and collaborative. In Glasgow, we want to see an ambitious agreement, a balanced agreement.

H.E. Amb. Gian Lorenzo Cornado (Italy): We have to work together in order to grant the best success in Glasgow and we need to have the involvement of the entire international community. There’s no one country that can lead this process. We don’t want to have to leave anyone behind so we need to support the poorest countries of the world. This is why it’s so important to mobilize USD 100 billion by 2025 in favor developing countries. This is essential to help them to fight and address climate change. We are also talking about loss and damage, about the countries more directly affected by climate change. I know what it means to live in a land which is only one meter tall and when major storms occur, waves go from one side to the other of the island. It is a real problem which can provoke migrations, people forced to leave their lands because of climate change. Glasgow is an historic event because the challenge is enormous. But we can make it all together. It’s a joint global planetary effort we have to promote and we have to believe in ourselves.

Eric Usher: We’ve heard reference to the production gap report that just come out in recent days pointing out the obvious inconsistency between NDCs and the fact that governments still have production plans that are double what would allow us to stay within the 1.5°C trajectory. There’s an inconsistency there. If you look at the financial sector, there is a lot of criticism of different financial actors, particularly the big banks. But if you look at what form of financing is happening in the financial sector, the banks have actually stopped or they’ve curtailed their lending significantly to these sectors. They realize it’s a bad and it doesn’t make sense. However, what the banks still do is help in the capital markets, help companies raise money where the banks don’t actually have the risk. Someone else is buying the bond or the stock in the capital markets and there they have not yet curtailed their facilitation. Part of the reason is because it’s still legal, it’s very remunerative and someone is buying. As long as it’s legal, somebody’s going to do it. Voluntary leadership from different parts of the private sector is very important to get things started but unless you have the internalization of these costs that makes them non-economic, we can’t wishfully think that these things won’t get dug up. It needs combined responsibility between the public and private sectors. A lot of it has to do with the policy signals. Fossil fuel subsidies are the most obvious inconsistency that need to be addressed.

Maria Mendiluce: In terms of fossil fuel subsidies, we think that this need to be avoided. It’s nonsense. We need to price externalities and not give them subsidies. It’s about countries committing to do it, the private sector cannot do it. In terms of green hydrogen, I love the project, congratulations! The current high energy prices together with the high carbon prices provide an incentive for these technologies to be scaled up. In addition to the Earthshot Prize, I think commitments from companies to buy those electrolyzers is what will help them in scaling up. I also think that we need to invest in infrastructure to bring renewable offshore, such as  wind, to the places where green can be created. It is an energy storage solution that is needed for our future and will avoid so much volatility and political pressure.

Vaitea Cowan: I would definitely start by recommending to stop subsidizing fossil fuels. This is the  biggest thing that needs to change because we cannot compete when the playing field is not levelized. It’s impossible for us to compete with artificially low prices from fossil fuels. Our technology will not require any subsidies or any external support. We know that our core technology will drive down the cost on its own but there are still many things that we are not controlling.

In November, the UK and Italy will host an event that many believe is the last chance to fix our climate. For nearly three decades, maybe even more, the UN, including UNEP, have been bringing together countries around the issue of climate change. The UNFCCC, COP26, will be held in Glasgow this year. One of the global priorities is climate change, part of the triple planetary crises that we are facing together with pollution and biodiversity. The time for action is now and we’ve got great hopes for COP26 to limit climate change to 1.5°C agreed in the Paris Agreement. The richness of the interventions and questions demonstrate that there is a willingness in Geneva to see COP26 succeed and to bring the results of COP26 to the debates here in Geneva so that we can mobilize actions around the outcomes. We can transform this ambition into action and we all have a role to play in this city to deliver the outcomes.