Wednesdays for the Planet is a series of online screenings and virtual expert presentations highlighting the natural world and other environmental challenges our planet faces. The virtual screenings are for educational purposes, non-profit and non-commercial.

A Plastic Ocean is an award-winning feature-length documentary brought to you by a group of dedicated scientists, film-makers, social entrepreneurs, scholars, environmentalists and journalists, that explores the fragile state of our oceans and uncovers alarming truths about the consequences of our disposable lifestyle.

The film documents the global effects of plastic pollution and highlights workable technologies and innovative solutions that everyone – from governments to individuals – can do, to create a cleaner and greener ocean.

One of the most important films of our time. 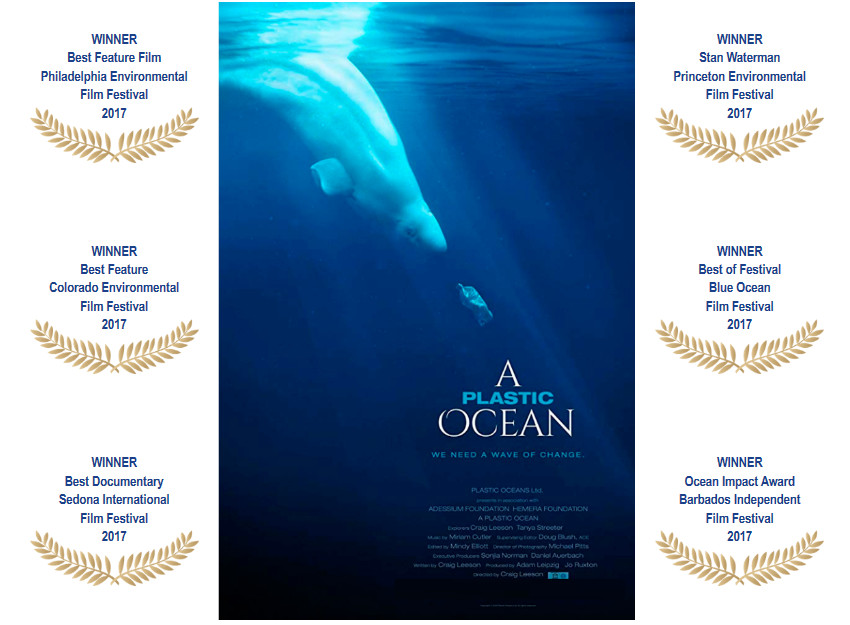 Watch the trailer; the full documentary is available on YouTube, Netflix or Amazon Prime.

Jo Ruxton joined the BBC Natural History Unit in 1997 after working for WWF in Hong Kong for 7 years, and was part of the celebrated The Blue Planet team. She continued to work at the BBC for 12 years and was involved in numerous underwater filming projects around the world, from Antarctica to the pristine reefs of the Caribbean and the Pacific Ocean. After leaving the BBC, Jo decided to produce the documentary feature film, “A Plastic Ocean” after initially hearing about the plastic problem in 2009 and began raising the funds to start the filming. She co-founded the Plastic Oceans Foundation as a UK Charity – now Ocean Generation – to continue the legacy the film through education and conservation programmes. as well as giving presentations around the world to students of all ages, members of the public, businesses and corporations.

She is now fundraising for her new film that will provide and uplifting story of our connection with the ocean and why we are the generation that must protect it now, for future generations.

Paul Rose helps scientists unlock and communicate global mysteries in the most remote and challenging regions of the planet. He is an experienced television presenter, radio broadcaster, former Vice President of the Royal Geographical Society, and Chair of the Expeditions and Fieldwork Division.  Paul is currently Expedition Leader for the National Geographic Pristine Seas Expeditions and actively collaborates with the Basel, Rotterdam and Stockholm Conventions (BRS) on plastic issues.

He was the Base Commander of Rothera Research Station, Antarctica, for the British Antarctic Survey for 10 years and was awarded HM The Queen’s Polar Medal. For his work with NASA and the Mars Lander project on Mt Erebus, Antarctica, he received the US Polar Medal. On his 2012 Greenland expedition, Paul led the first expedition to successfully traverse a new 275km icecap route of Knud Rasmussen Land and repeated his first ascent of the north face of Gunnsbjørnfjeld, the highest mountain in the Arctic.

Hel co-authored the BBC book, Oceans, and wrote the Humboldt and Magellan chapters for the book Great Explorers published by Thames and Hudson in 2010. His commissioned magazine articles include the Sunday Times Eureka magazine and a monthly column for Sport Diver magazine.

He is an Honorary Fellow of the University of Cumbria and was a member of the 2010 Rolex Awards jury. In addition, the Royal Geographical Society has awarded Paul the Founder’s Medal and the Ness Award.

A mountain has been named after him in Antarctica.

Plastic and Wildlife in the Oceans

The Ocean Generation, previously Plastic Oceans Foundation and founded by the producer of A Plastic Ocean Jo Ruxton, continues the work on the plastic problem as well as to focus on new ocean issues, in line with the UN Decade of Ocean Science.

More than 8 million tonnes of plastic enter the ocean each year and 80% of that comes from you and me – from what we throw away. This causes great harm to marine ecosystems and we depend on the ocean for our survival.

According to the International Union on Conservation of Nature (IUCN), the most visible and disturbing impacts of marine plastics are the ingestion, suffocation and entanglement of hundreds of marine species. Marine wildlife such as seabirds, whales, fishes and turtles, mistake plastic waste for prey, and most die of starvation as their stomachs are filled with plastic debris. They also suffer from lacerations, infections, reduced ability to swim, and internal injuries. Floating plastics also contribute to the spread of invasive marine organisms and bacteria, which disrupt ecosystems.

According to WWF, a major threat to marine biodiversity, abandoned fishing gear, or ghost gear, is estimated to comprise up to 10% of plastic waste in our oceans, by volume. While this may seem like a small number, ghost gear is the most harmful form of plastic pollution to marine species. Ghost gear continues to capture wildlife well after it’s abandoned, pollute habitats, and enters the food web as it degrades. Ghost gear impacts 45% of all marine mammals on IUCN’s Red List of Threatened Species.

Corona: The Pandemic and the Pangolin

An uncomfortable, yet eye-opening, documentary that goes at the root of the pandemic to untangle the deep links between wildlife and our health

The Sanctuary: Survival Stories of the Alps

An incredible journey through the frozen heart of Europe to discover that it is not always the strongest who survives, but more often those who help each other