The 19th meeting of the Conference of the Parties to the Convention on International Trade in Endangered Species of Wild Fauna and Flora (CITES CoP19), or World Wildlife Conference, took place in Panama, from 14 to 25 November 2022.

The Convention on International Trade in Endangered Species of Wild Fauna and Flora, known as CITES or the Washington Convention, was signed in Washington, D.C., the United States of America, on 3 March 1973 and entered into force on 1 July 1975. Its secretariat is based in Geneva, at the International Environment House.

CITES regulates international trade in specimens of species of wild fauna and flora based on a system of permits and certificates issued under certain conditions. It covers export, re-export, import and landing from the high seas of live and dead animals and plants and their parts and derivatives.

Appendices I, II and III to the Convention are lists of species afforded different levels or types of protection from over-exploitation.

The Conference of the Parties (CoP), which is the supreme decision-making body of the Convention and comprises all its Parties, has agreed in Resolution Conf. 9.24 (Rev. CoP17) on a set of biological and trade criteria to help determine whether a species should be included in Appendices I or II. At each regular meeting of the CoP, Parties submit proposals based on those criteria to amend these two Appendices. Those amendment proposals are discussed and then submitted to a vote.

Find out more on CITES on InforMEA

From Geneva to Panama City

The Parties to the Convention on International Trade in Endangered Species of Wild Fauna and Flora convened in Geneva in August 2019 for the CITES triennial World Wildlife Conference (18th meeting of the Conference of the Parties). → Read final press release

Three years later, the World Wildlife Conference or 19th meeting of the Conference of the Parties is convening in Panama City.

All the decisions of CoP19 were streamed live from Panama, via the CITES.ORG website. The Earth Negotiations Bulletin provided daily summaries and highlights.

A total of 52 proposals and more than 100 working documents were considered on by the 184 Parties to CITES. Amongst many other matters, the World Wildlife Conference discussed the following issues:

The CoP adopted a total of 46 Proposals of the 52 put forward. The CoP also reached a record number of 365 decisions as they worked to safeguard threatened wildlife species, while at the same time allowing the international trade that underpins human well-being and contributes to conservation efforts.

Decisions taken by parties at the CoP will come into force 90 days after the end of the meeting – on 23 February 2023. The objective of the Convention is that all international trade in CITES listed species is sustainable, legal and consistent with the long-term conservation of species and that CITES plays its part in halting biodiversity loss, ensuring its sustainable use, and achieving the 2030 Agenda for Sustainable Development. 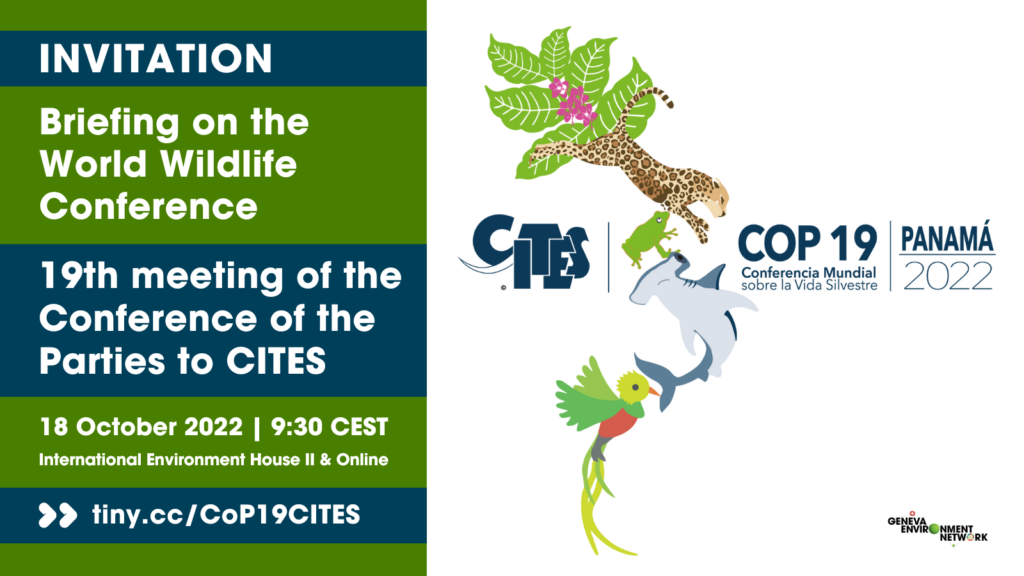 A briefing focusing on the preparations for CITES CoP19, or World Wildlife Conference, took place at the International Environment House and online, on Tuesday 18 October 2022.