This hybrid session was a side-event to the Convention on Biological Diversity (CBD) resumed sessions of the twenty-fourth meeting of the Subsidiary Body on Scientific, Technical and Technological Advice (SBSTTA 24), the third meeting of the Subsidiary Body on Implementation (SBI 3) and the Open-ended Working Group on the Post-2020 Global Biodiversity Framework (WG2020-3), taking place in Geneva, in March 2022. The side-event was organized by the Rainforest Foundation Norway, Forest Peoples Programme and the Government of Norway, with the support of the Geneva Environment Network.

One of the key elements in a new Global Biodiversity Framework (GBF) will be how the frameworks’ goals, targets and implementation system can incentivize practical biodiversity solutions on the ground. There is a large overlap between indigenous peoples’ areas and areas with very high biodiversity, both in tropical forests and other biodiversity rich ecosystems. How can a new GBF best support the key role and respect the rights of indigenous peoples and local communities (IPLC)?

Examples from rainforest countries, which – when scaled up – have the potential to make globally significant contributions to the conservation and sustainable use of biodiversity, will be presented at this side-event. Key questions in the discussion will be how the new agreement and its implementation mechanisms should be formulated to ensure support and enhancement of IPLC contributions. Significant opportunities arise for using scant public and private resources in ways that can address the climate and biodiversity crises together, and opportunities to build on significant pledges already made at COP26 of the UNFCCC. Funding agencies will provide their perspective on how a new GBF best can incentivize increased funding for IPLC solutions.

The purpose is to come up with concrete input to formulations in the new GBF, as well as its implementation and monitoring systems, ensuring the rights of indigenous peoples and building actions and programs on their vast experience and knowledge in sustainable forest management, not only in area-based conservation targets but across the GBF.

Rainforest Foundation Norway (RFN), Forest Peoples Programme (FPP) and the Government of Norway have long experience in bringing actors from different sectors of society together – policy, finance, industry, indigenous peoples, CSOs –and are certain that this can lead to unexpected concrete suggestions and solutions needed now. 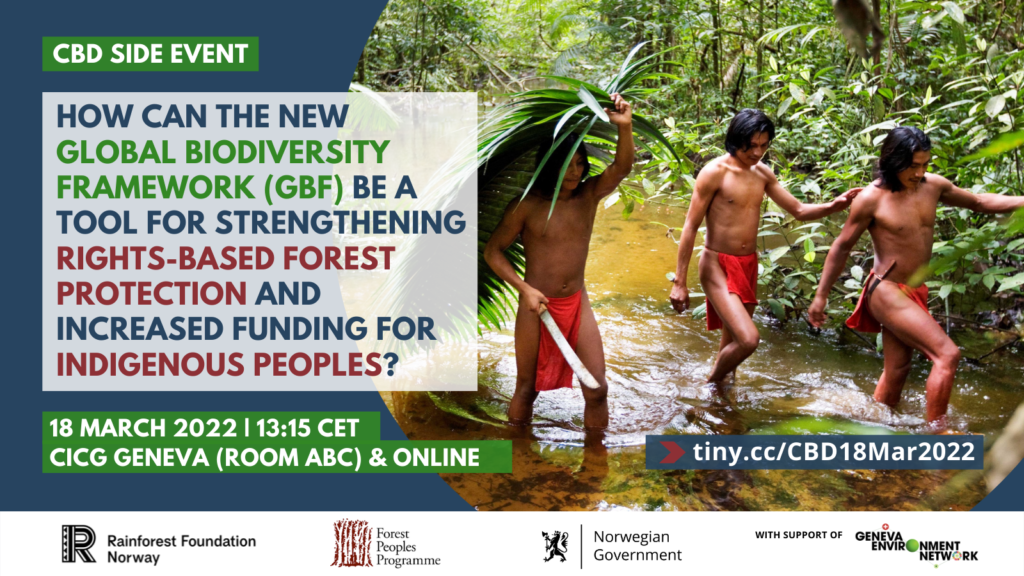 Head of CBD Delegation, Norwegian Ministry of Climate and Environment

Although it is well documented that biodiverse indigenous lands are often the best conserved, Indigenous peoples receive less than 1% of climate finance.

How can the Global Biodiversity Framework boost concrete results for rights-based forest protection and increased finance? To help answer we have a great panel here: Key Indigenous Peoples representatives from the Amazon and the Philippines, Governments of the UK, Norway, and Colombia, and on a videolink from the US Ford Foundation that have all pledged to help end deforestation partnering with indigenous people, local communities and civil society in a rights-based manner.

Numbers are only one part of our approach. We want to bring some of that momentum around the finance to the negotiations here, but we also want to get into some of the important epistemic and structural issues that the GBF is perfectly designed to do and that will be taking quite an active role in the coming days.

Kevin Currey is the program officer at the Natural Resources and Climate Change team of Ford Foundation, where he focuses on helping indigenous people and local communities secure their lands and resource rights, and on realizing the potential of forest and land use to mitigate climate change and benefit low-income rural communities. Ford Foundation was also one of those behind the IPLC pledged at the climate summit in Glasgow

I am counting on all of you there in Geneva to get this message out. That it is not enough just to talk about the knowledge and participation of Indigenous Peoples and local communities. Their rights have to be at thecenter. Their voices have to be at the center. And we have fund the work that they are already doing because they have been subsidizing the rest of us through their efforts to protect forests and ecosystems. It is now time to pay our fair share.

Gaute Voigt Hanssen is Head of Norway’s CBD Delegation from the Ministry of Climate and Environment and has been very active on rights-based rainforest protection.

After Brazil, Colombia is the most biodiverse country in the world, with its precious rainforests teeming with life. Felipe Guerra is a Specialized Professional from National Natural Parks of Colombia.

The next speaker is Joji Carino, Ibaloi-Igorot People of Philippines and representative of the Forest Peoples Programme.

Q. Both UK and Norway were involved in the work during this week at the United Nations in Strengthening Implementation in the Global Biodiversity Framework. Many panellists mentioned several challenges in ensuring customary land financial flows in the right direction. The question is about implementation and monitoring: how do we ensure that we walk the talk?

Q: How should the role of IPLCs be reflected in the Global Biodiversity Framework and how do we ensure its implementation?

Q. Felipe, you talked about the laws and the policies that Colombia has in place to protect both the Rainforest and also it is indigenous people and empower its indigenous people. You mentioned also the partnership between the two and used the word “marriage”. Harold, is it a happy marriage? Given that there’s no secret that Colombia is exiting after years of conflicts with and as consequence also both, deforestation and other violations.

Q: What kind of opportunities do you see that the new Biodiversity Framework can deliver?

Q. I am Helena Paul, from Econexus. We have been coming to these meetings for a long time and I want to ask you about the issue of offsetting simply because I gather there has a big project in Sabah in Borneo where land designated offsets for 100 to 200 years, which sounds quite extraordinary, and I do not know whether that is actually finally been approved. But I believe that there are many companies that would like to be able to set up offsetting projects based on indigenous lands. I would like to ask what your opinions are on that.

Q. Louis Donesetta Corpioni would like to ask specifically about the mechanisms that are being devised so that the resources can reach indigenous communities and how grassroots organizations who are already conserving their forests may be able to access the kinds of pledges that have been discussed here today.

Q. Penin Erinda from Spain has asked a question specifically about language use and concepts and the use, by the Ford Foundation, of the phrase effective strategy for Indigenous Peoples to conserve forests. The question is regarding the choice of words because the rights should exist regardless of the effective strategy, the effectiveness or not, of their conservation contributions.

How do we make sure that the money and the financial flows go to the right places and also access vulnerable and threatened communities protecting the rainforest?

In addition to the live WebEx and Facebook transmissions, the videos are available on this webpage.