About the Convention on Wetlands

The Convention on Wetlands (Ramsar Convention) is the intergovernmental treaty that provides the framework for the conservation and wise use of wetlands and their resources. The Convention was adopted in the Iranian city of Ramsar in 1971 and came into force in 1975. Managing wetlands is a global challenge and the Convention presently counts 172 countries as contracting parties, which recognize the value of having one international treaty dedicated to a single ecosystem. The Convention’s mission is the conservation and wise use of all wetlands through local and national actions and international cooperation, as a contribution towards achieving sustainable development throughout the world.

At the centre of the Convention’s philosophy is the “wise use” of wetlands. When contracting parties accede to the Convention, they commit to work towards the wise use of all the wetlands and water resources in their territory, through national plans, policies and legislation, management actions and public education. The Convention defines wise use of wetlands as the maintenance of their ecological character, achieved through the implementation of ecosystem approaches, within the context of sustainable development. Wise use can thus be seen as the conservation and sustainable use of wetlands and all the services they provide, for the benefit of people and nature.

COP14 in Wuhan and Geneva

The opening ceremony and the high-level segment were held in a hybrid modality with participation of invited representatives both in Wuhan and Geneva linked via video.

Negotiations and all other aspects of COP14 took place in-person in Geneva, with 21 resolutions adopted.

📢#COP14 is putting #Wetlands action for people and nature at the 💚of #climate, #biodiversity & @GlobalGoalsUN

The Secretary General of the Convention on Wetlands, Musonda Mumba, provided a special message ahead of COP14.

During the opening ceremony, China President Xi Jinping, appeared via video message and emphasized China’s historic achievements in wetlands conservation since joining the Convention in 1992. He highlighted the proposed International Mangrove Center to be hosted in Shenzhen, noted the decision to designate 10% of national parks to wetlands conservation which will incorporate 11 million hectares of wetlands into the national system, and backed the convening of a conference of the World Coastal Forum. 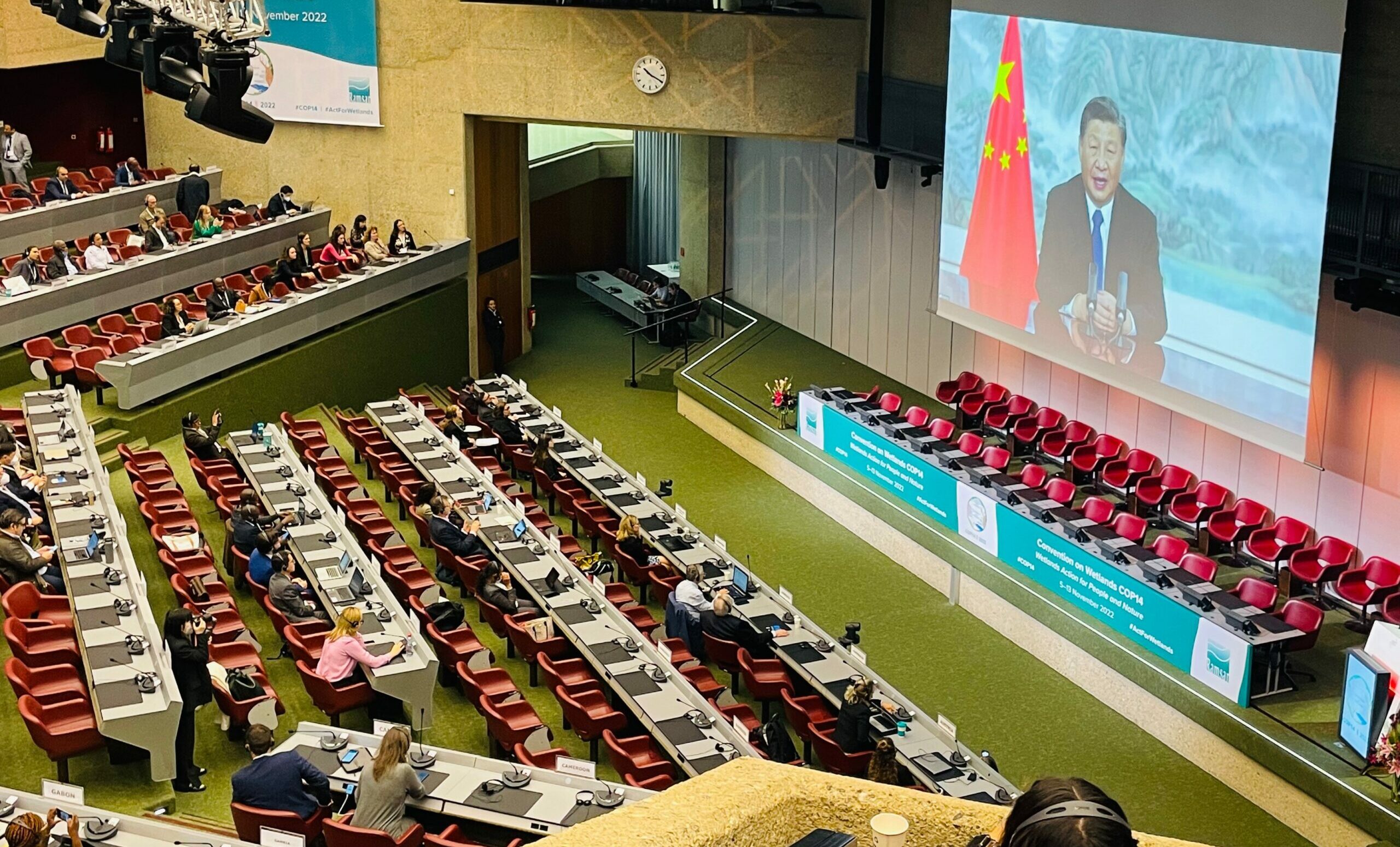 The High-Level Segment took place on Sunday 6 November in a hybrid modality in Wuhan and Geneva. On this occasion, ministers and ambassadors from Contracting Parties to the Convention on Wetlands adopted the Wuhan Declaration.

The Declaration emphasizes the urgency for Contracting Parties to implement the Convention on Wetlands in collaboration with other multilateral environmental agreements: to halt and reverse biodiversity loss; to mitigate, adapt and build resilience to climate change; and to deliver the 2030 Agenda for Sustainable Development Goals and the goals of the UN Decade on Ecosystem Restoration.

Exhibitions were visible in the main hall of the conference centre. The government of Switzerland organized field trips for participants on Friday 11 November.

Over 70 side events related to regional and global themes relevant to the Convention were scheduled. The Geneva Environment Network support its partners for some events (see below). To explore all proposed events, see the full programme here.

8 November 2022 | 13:15–14:15 | Organized by the International Union for Conservation of Nature and the Geneva Environment Network, with the support of NetworkNature and the EU Commission

Wetlands are areas where water is the primary factor controlling the environment and the associated plant and animal life. The Convention uses a broad definition of wetlands that includes both freshwater and marine and coastal ecosystems such as all lakes and rivers, underground aquifers, swamps and marshes, wet grasslands, peatlands, oases, estuaries, deltas and tidal flats, mangroves and other coastal areas, coral reefs, and all human-made sites such as fishponds, rice paddies, reservoirs and saltpans. They are among the most diverse and productive ecosystems, providing essential services and supplying all our freshwater.

Nearly 90% of the world’s wetlands have been degraded since the 1700s. According to the Global Wetland Outlook, we lose wetlands three times faster than natural forests. Yet, these ecosystems are critically important as they contribute to biodiversity, climate mitigation and adaptation, freshwater availability, world economies and more. According to IPBES Global Assessment Report on Biodiversity and Ecosystem Services, wetlands are the most threatened ecosystem, impacting 40% of the world’s plant and animal species that live or breed in wetlands. It is worrying that they are disappearing fast due to human activities and climate change. Therefore, the conservation of wetlands is a vital task of humanity, which can help achieving the Sustainable Development Goals by 2030.

More on the importance of wetlands

Various actors in the Geneva region, including the State of Geneva and many local associations, are actively working to protect wetlands and raise awareness of their importance. The Geneva region also hosts beautiful and valuable wetland areas which form an important Ramsar site. The site contains a section of the Rhône River in Geneva and downstream, including the shores of Lake Geneva and riverbanks within the city, riverside areas of the Rhône and natural valleys of the Allondon and the Laire, the Rhône’s two main tributaries in the area. It forms a green corridor with a varied vegetation cover and habitats. As some of the last remaining relatively unmodified stretches of the Rhône in Switzerland, it is one of the most important wintering sites for waterbirds in the country.