"Forests and Livelihoods: Sustaining People and Planet" is the theme for World Wildlife Day, celebrated each year on 3 March to commemorate the day of signature of the Convention on International Trade in Endangered Species of Wild Fauna and Flora (CITES) in 1973.

World Wildlife Day celebrates the beautiful and varied forms of wild fauna and flora and to raise awareness of the multitude of benefits that their conservation provides to people. At the same time, World Wildlife Day reminds us of the urgent need to step up the fight against wildlife crime and human-induced reduction of species, which have wide-ranging economic, environmental and social impacts.

Each year, World Wildlife Day is celebrated on 3 March, the day of signature of the Convention on International Trade in Endangered Species of Wild Fauna and Flora (CITES) in 1973. 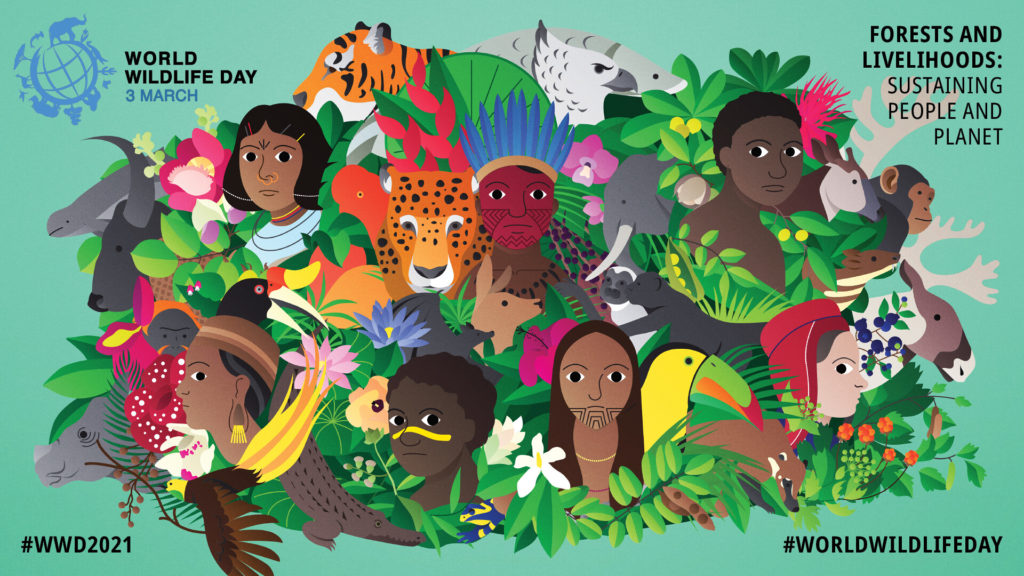 Under the theme “Forests and Livelihoods: Sustaining People and Planet” we highlight the central role of forests, forest species and ecosystems services in sustaining the livelihoods of hundreds of millions of people globally, and particularly of indigenous and local communities with historic ties to forested and forest-adjacent areas. This aligns with the UN Sustainable Development Goals 1, 12, 13 and 15, and their wide-ranging commitments to alleviating poverty, ensuring sustainable use of resources, and on conserving life land.

On 3 March 2021, World Wildlife Day will celebrate forest-based livelihoods and seek to promote forest and forest wildlife management models and practices that accommodate both human well-being and the long-term conservation of forests, forest-dwelling species of wild fauna and flora and the ecosystems they sustain, and promote the value of traditional practices and knowledge that contribute to establishing a more sustainable relationship with these crucial natural systems.

CITES has teamed up with Jackson Wild and the United Nations Development Programme (UNDP) to organize an international film showcase focusing on the immense value of our planet’s forests, their extensive ecosystem services and the millions of human livelihoods they sustain.

Importance of Wildlife and Forests

The animals and plants that live in the wild have an intrinsic value and contribute to the ecological, genetic, social, economic, scientific, educational, cultural, recreational and aesthetic aspects of human well-being and to sustainable development.

Between 200 and 350 million people live within or adjacent to forested areas around the world, relying on the various ecosystem services provided by forest and forest species for their livelihoods and to cover their most basic needs, including food, shelter, energy and medicines.

Roughly 28% of the world’s land surface is currently managed by indigenous peoples, including some of the most ecologically intact forests on the planet. These spaces are not only central to their economic and personal well-being, but also to their cultural identities.

Forests, forests species and the livelihoods that depend on them currently find themselves at the crossroads of the multiple planetary crises we currently face, from climate change, to biodiversity loss and the health, social and economic impacts of the COVID-19 pandemic.

Here are some facts on forests from UN-REDD. 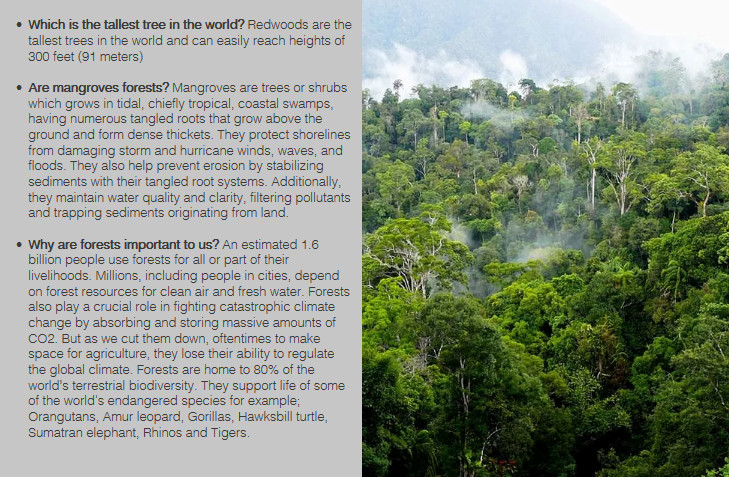 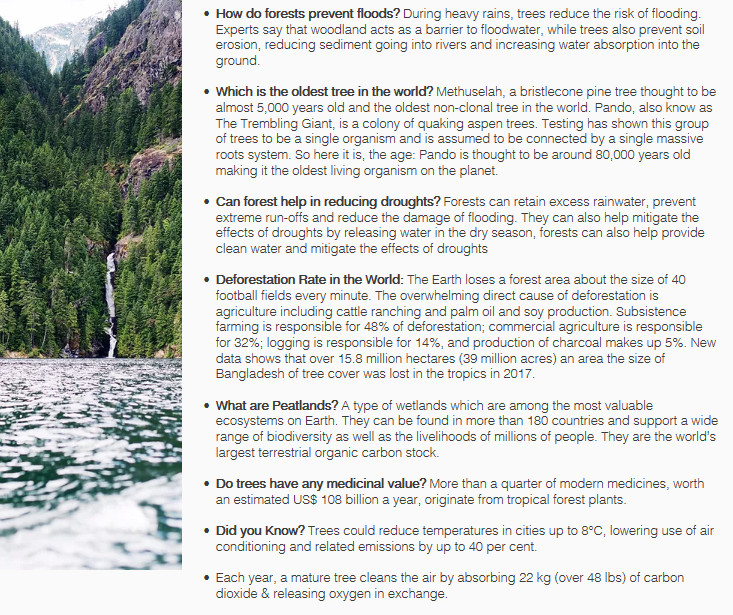 According to WWF, about 80% of the world’s documented land-based species can be found in forests. When species lose their forest homes, they are often unable to subsist in the small fragments of forested land left behind. They become more accessible to hunters and poachers, their numbers begin to dwindle and some eventually go extinct. Even localized deforestation can result in extinctions as many unique species exist in small isolated geographic locations in the world.

Forests are also major players in the carbon and water cycles that make life possible. When forests are lost or degraded, their destruction sets off a series of changes that affect life both locally and around the world.

Since its establishment in 1970, the IUCN’s Environmental Law Centre has provided practitioners around the world with legal support to help address poaching and illegal wildlife trade. The IUCN also estimated that approximately 29% of the 82,954 species which are listed on the IUCN Red List of Threatened Species are threatened with extinction. If habitat loss and climate change partly explain the alarming extinction rate, disturbance, illegal taking and illegal killing now represent a significant and growing pressure on wild species of fauna and flora.  Environmental crime has become the fourth largest crime at the global level.

The joint UNECE/FAO Forestry and Timber Section supports developing evidence-based policies for sustainable forest management and to communicates about the many products and ecosystem services provided to society while assisting countries of the region to monitor and manage forests.

The UN-REDD Programme  was launched in 2008 and builds on the convening role and technical expertise of the Food and Agriculture Organization of the United Nations (FAO), the United Nations Development Programme (UNDP) and the United Nations Environment Programme (UNEP). The Programme supports nationally led REDD+ processes and promotes the informed and meaningful involvement of all stakeholders, including indigenous peoples and other forest-dependent communities, in national and international REDD+ implementation. Additionally, the programme supports national REDD+ readiness efforts in 65 partner countries ,spanning Africa, Asia-Pacific and Latin America.

In 1996, UNCTAD launched the BioTrade Initiative to support the objectives of the Convention on Biological Diversity. BioTrade refers to those activities of collection, production, transformation, and commercialization of goods and services derived from native biodiversity under the criteria of environmental, social and economic sustainability. This includes activities relying on forests and supporting the livelihoods of the people living in or adjacent to forests.

WWF has been working on forest issues for 50 years. It has supported the creation of protected areas, helped move the forest sector towards sustainability and transparency, and working across the world to halt deforestation, help restore forests and put deforestation-free commitments into action.

Earthworm Foundation, formerly known as The Forest Trust, works to preserve forests and oceans, while empowering the people that care for our lands and produce our everyday needs. Their projects contribute to a world where forests are a boundless source of materials and a home for biodiversity; communities see their rights respected and have opportunities to develop; workers are seen as productive partners; and agriculture becomes the instrument to feed a hungry planet and keep our climate stable.

Geneva is active in protecting biodiversity and forests, especially due to their proximity to the urban areas. While the human population is close to nature, it also induces significant pressures on the environments. As proposed in Geneva’s Strategy Plan on Biodiversity, it is essential to promote biodiversity at every scale, from land use planning to concrete achievements in neighborhoods or gardens. In addition, te forest reserve of the Grand Bois de Satigny was established by Geneva’s Conseil d’Etat on 23 May 2018.  With nearly 100 hectares, it is one of the largest integral forest reserves in the Swiss Plateau, thus meeting the recommendations and priorities of the Swiss Confederation. All logging and active management of natural environments is prohibited in this reserve. The reserve remains fully open to the public and will offer future generations the opportunity to discover a large space devoted entirely to nature and its natural evolution.

Faune Genève is a non-profit association aiming at protecting and raising awareness on the fauna of Geneva. Its website is an official platform for naturalists and wildlife observers in the region.

Parc Challandes works for the conservation of local and exotic animal species by participating in conservation programs, providing environmental awareness and education on wildlife, developing a recognized animal-assisted intervention center, and collaborating in research.

WWF Geneva works to implement projects in support of biodiversity, which includes a Panda Club that organizes outings and activities for young people on environmental issues.

Wednesdays for the Planet | One Planet and Sanctuary Forest

Wednesdays for the Planet | A Plastic Ocean

Wednesdays for the Planet | The Sanctuary: Survival Stories of the Alps

Wednesdays for the Planet | Corona: The Pandemic and the Pangolin

Wednesdays for the Planet | Chasing Coral