Wednesdays for the Planet is a series of online screenings and virtual presentations with experts highlighting the natural world and other environmental challenges our planet faces. The virtual screenings are for educational purposes, non-profit and non-commercial.

Chasing Coral is an award-winning documentary that follows a team of divers, photographers and scientists out to photograph the elusive process of coral bleaching, a phenomenon happening at an unprecedented rate around the world from warming ocean temperatures. The film took 3.5 years to make, features 500 hours of underwater footage, and submissions from over 30 countries.

This story is bigger than coral reefs, it’s about the collapse of an entire ecosystem and the role we all play in taking action while there is still time. That is why I’m thrilled to see people connecting the film to the local environmental changes people are facing and the local solutions we can start accelerating today. 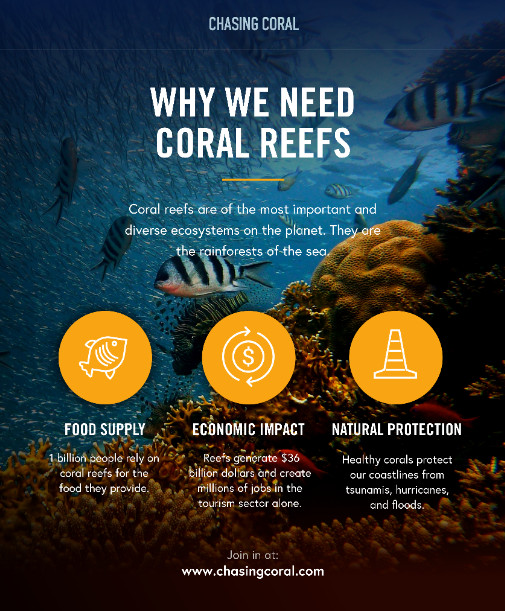 The Geneva Environment Network will have two experts who will speak on the conservation efforts and challenges related to coral reefs and the ocean.

Joao Sousa is a Marine Project Officer at the International Union for Conservation of Nature (IUCN) where he focuses on collaborative solutions to mitigate plastic debris in the world’s oceans. This involves coordinating research to inform policy, creating platforms to encourage innovation and sharing of best practices, and cooperating with industry to change behavior. Joao also works on conservation and mitigation for the oil and gas industry in the North Sea (decommissioning platforms), as well as private sector engagement for best practices in the production, extraction and transformation sectors in Mozambique.

In the last eight years, within the Global Marine Programme, he developed an extensive network and stakeholder forum leading to the development of the “Close the Plastic Tap“ Programme and projects in circular economy, waste management, plastic debris and waste management policies.

Daniel Kachelriess joined Sea Shepard Legal as Senior Policy Specialist in April 2020, bringing with him extensive experience in building capacity and supporting decision making in ocean conservation and fisheries at the international level. Daniel previously served as Marine Species Officer of the Secretariat of the Convention on International Trade in Endangered Species of Wild Fauna and Flora (CITES) and led on many technical aspects of the implementation of the Convention for marine species. In this and previous roles, he also contributed to international policy processes at the United Nations headquarters in New York, in particular in the Legal Committee of the General Assembly and negotiations on Sustainable Development Goal 14, as well as the work of other UN bodies. Based on these experiences, Daniel is excited to continue supporting governments in transforming sound science into well-crafted policies, regulations, and laws to advance ocean conservation in his role.