Overfishing negatively impacts sustainable fisheries, livelihood and world fish stocks. These unsustainable practices threaten local biodiversity and food security in many places around the world. Discover what organizations in Geneva and beyond are doing to address the issue at the global level.

More than 820 million people depend on fisheries and aquaculture for food, nutrition, and income (FAO, n.d.). But the ability of our fisheries to provide jobs and nutrition is being threatened by an unprecedented crisis of overfishing and improper resource management. Nearly 90% of global marine fish stocks are fully exploited, overexploited, or depleted (FAO, 2018). Overfishing is closely tied to bycatch — the capture of unwanted sea life while fishing for a different species — which is also serious marine threat.

Some forms of fisheries subsidies contribute to this detrimental impact. Fishing subsidies are estimated to be as high as $35 billion worldwide, of which $22 billion directly contributes to overfishing (Sumaila et al., 2019). Subsidies also foster inequality, as they disproportionately fund big business rather than small-scale and artisanal fisheries. Regulating these harmful subsidies can therefore assist in reducing unfair competition in accessing fisheries resources at sea, whilst at the same time seeking to safeguard fisheries resources, livelihoods and ecosys​tems.

Through the adoption of the Sustainable Development Goals (SDGs), governments around the world have agreed that conserving and sustainably using the oceans, seas and marine resources is essential for sustainable development. In particular, target 14.6 acknowledges the detrimental effect of harmful subsidies and the need to eliminate them to achieve a sustainable blue economy.

Goal 14. Conserve and sustainably use the oceans, seas and marine resources for sustainable development

Target 14.6. By 2020, prohibit certain forms of fisheries subsidies which contribute to overcapacity and overfishing, eliminate subsidies that contribute to illegal, unreported and unregulated fishing and refrain from introducing new such subsidies, recognizing that appropriate and effective special and differential treatment for developing and least developed countries should be an integral part of the World Trade Organization fisheries subsidies negotiation

At the Doha Ministerial Conference in 2001, negotiations on fisheries subsidies at the WTO were launched with a mandate to clarify and improve existing WTO rules. The adoption of the SDGs in 2015 and of a negotiating mandate in 2017 gave renewed urgency to the discussions, and left the WTO with the task of securing an agreement by 2020 on disciplines to eliminate subsidies for illegal, unreported and unregulated fishing and to prohibit subsidies that contribute to overcapacity and overfishing, with special and differential treatment for developing and least developed countries.

Despite ongoing discussion for nearly twenty years, leaders have yet to reach an agreement. The upcoming 12th Ministerial Conference (MC12) from 30 November to 3 December 2021 in Geneva (originally scheduled for June 2020 in Nur-Sultan, Kazakhstan) is the opportunity to conclude these negotiations and achieve positive outcomes for SDG 14.6 .

On the occasion of newly appointed Director-General Ngozi Okonjo-Iweala’s term on 1 March 2021, the Stop Funding Overfishing campaign positioned an ice sculpture of a fish in front of the WTO’s HQ.

The chair of the fisheries subsidies negotiations, Ambassador Santiago Wills of Colombia, introduced on 30 June a revised draft text. The changes proposed in the text are intended to point members towards the convergence needed to successfully conclude negotiations.

“Concluding these negotiations is a top priority for this organization, not only for the fisheries, but also for the WTO system. We simply cannot afford to fail here.”

At the July ministerial meeting with 104 ministers and heads of delegation, WTO members pledged to conclude the negotiations soon and certainly before the WTO’s Ministerial Conference in early December, and to empower their Geneva-based delegations to do so. Members also confirmed that the negotiating text currently before them can be used as the basis for the talks to strike the final deal. 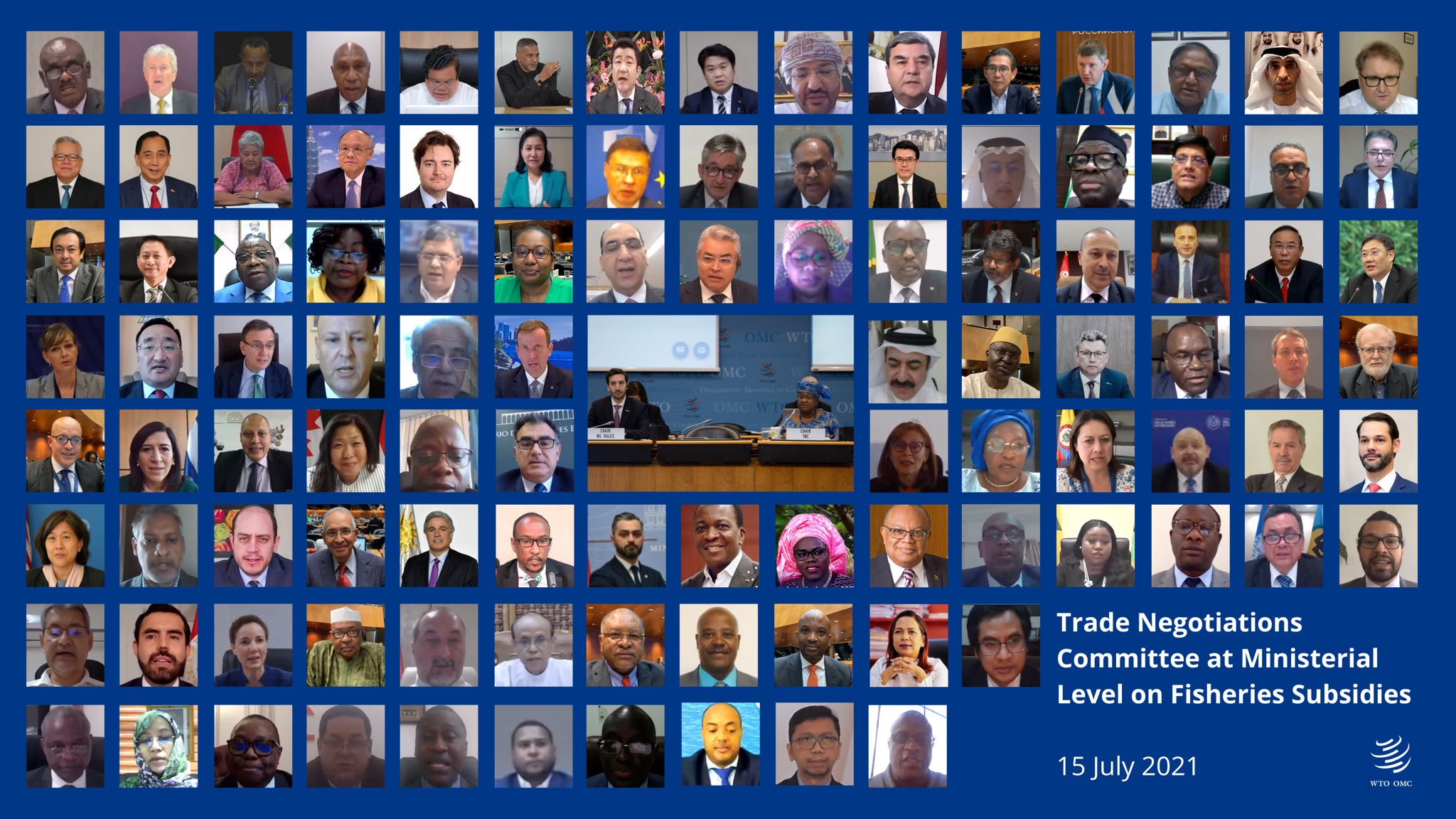 The resources below provides further information on the ongoing efforts to address overfishing at the global level.

The role of Geneva

Various Geneva-based organizations or secretariats – listed below in alphabetical order – work actively to address overfishing and promote a sustainable blue economy. UN system’s engagement with the issue also goes beyond Geneva, with organizations around the world involved, such as the UN Environment Programme (UNEP) and the Food and Agriculture Organization (FAO).

CITES ensures that international trade in specimens of wild animals and plants – including some listed commercially exploited aquatic species – does not threaten their survival.

The FAO Fisheries Division works to strengthen global governance and the managerial and technical capacities of members and to lead consensus-building towards improved conservation and utilization of aquatic resources.

The IISD supports the current WTO negotiations to end harmful fisheries subsidies, recognizing the need to restore the sustainability of fish stocks while supporting livelihoods and food security.

International Union for Conservation of Nature

IUCN engage in advocating international agreements and influencing policy for a sustainable management of fisheries and aquaculture worldwide.

The South Centre produces research and support developing countries to promote their interests in international negotiations, including those on fisheries subsidies at the WTO.

In order to support global efforts to tackle overfishing, illegal, unreported and unregulated fishing, UNECE promotes and facilitates the implementation of sustainable fisheries standards on a global scale.

The World Economic Forum, in collaboration with the World Resources Institute, convenes the Friends of Ocean Action, a coalition of leaders working together to protect the seas.

As the only global international organization dealing with the rules of trade between nations, WTO is the stage of the negotiations on fisheries subsidies.

As an independent conservation organization active in nearly 100 countries, WWF works to promote sustainable fishing practices for the benefit of nature and people.