"Wetlands and Water" is the 2021 theme for World Wetlands Day, celebrated each year on 2 February. #RestoreWetlands #zoneshumides2021GE

World Wetlands Day, celebrated each year on 2 February, marks the date of the adoption of the Convention on Wetlands (Ramsar Convention) on 2 February 1971 in Ramsar, Iran.

Wetlands are among the most diverse and productive ecosystems. They provide essential services and supply all our fresh water. Wetlands are land areas that are saturated or flooded with water either permanently or seasonally. Inland wetlands include marshes, ponds, lakes, fens, rivers, floodplains, and swamps. Coastal wetlands include saltwater marshes, estuaries, mangroves, lagoons and even coral reefs. Fishponds, rice paddies, and saltpans are human-made wetlands.

Wetlands are vital for human survival. They are among the world’s most productive environments; cradles of biological diversity that provide the water and productivity upon which countless species of plants and animals depend for survival. Wetlands are indispensable for the countless benefits or “ecosystem services” that they provide humanity, ranging from freshwater supply, food and building materials, and biodiversity, to flood control, groundwater recharge, and climate change mitigation.

In addition, according to the World Heritage and Ramsar Conventions, 64% of the world’s wetlands have disappeared since the beginning of the last century. In most regions across the world, wetlands continue to decline compromising the benefits that wetlands provide to people. Therefore, the conservation of wetlands is a vital task of humanity, which can help achieving the Sustainable Development Goals by 2030.

Furthermore, though wetlands cover only around six per cent of the Earth’s land surface, 40 per cent of all plant and animal species live or breed in wetlands. It is worrying that they are disappearing fast due to human activities and climate change. According to the Global Wetland Outlook, we lose wetlands three times faster than natural forests.

“Wetlands and Water” was the theme for 2021, highlighting the contribution of wetlands to the quantity and quality of freshwater on our planet. Water and wetlands are connected in an inseparable co-existence that is vital to life, our wellbeing and the health of our planet.

We are facing a growing freshwater crisis that threatens people and our planet. We use more freshwater than nature can replenish and we are destroying the ecosystem that water and all life depend on most – wetlands. 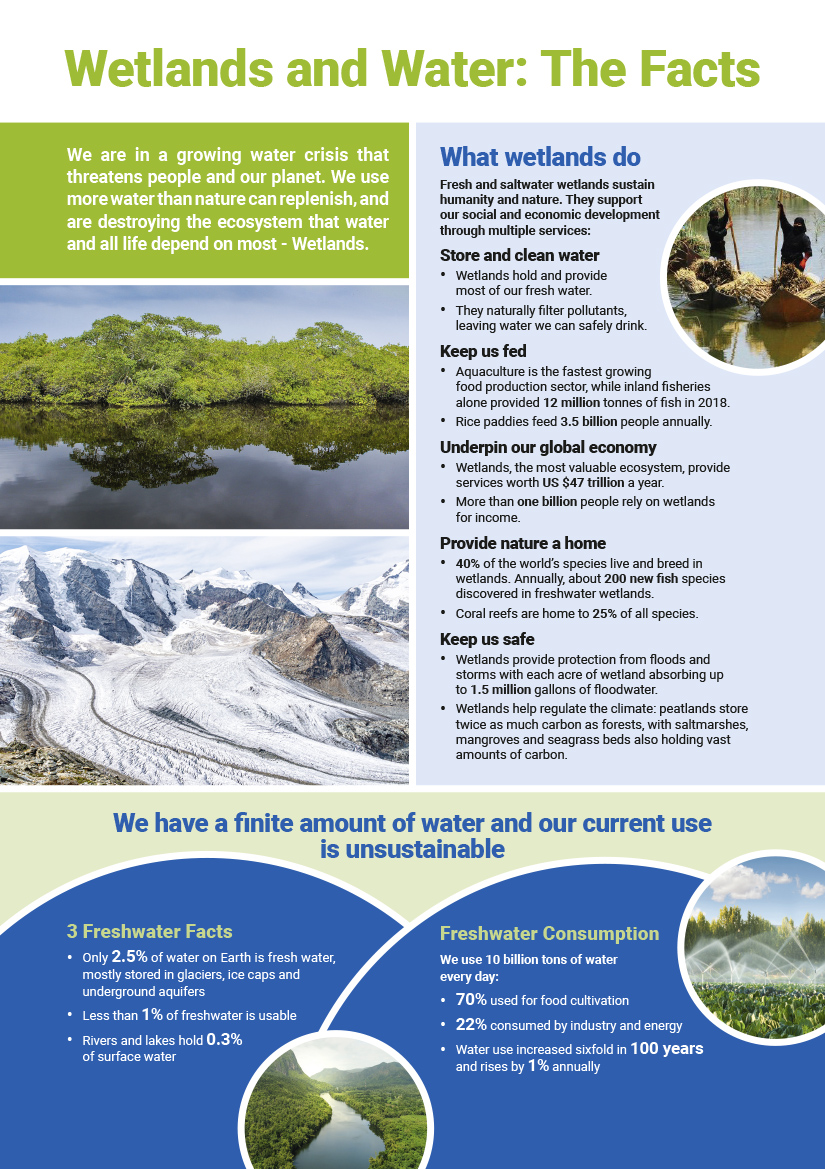 The Convention on Wetlands (Ramsar Convention) is the intergovernmental treaty that provides the framework for the conservation and wise use of wetlands and their resources. The Convention was adopted in the Iranian city of Ramsar in 1971 and came into force in 1975.

Managing wetlands is a global challenge and the Convention presently counts 171 countries as contracting parties, which recognize the value of having one international treaty dedicated to a single ecosystem.

The Convention’s mission is the conservation and wise use of all wetlands through local and national actions and international cooperation, as a contribution towards achieving sustainable development throughout the world.

“Wise Use” of Wetlands under the Ramsar Convention

At the centre of the Convention’s philosophy is the “wise use” of wetlands. When contracting parties accede to the Convention, they commit to work towards the wise use of all the wetlands and water resources in their territory, through national plans, policies and legislation, management actions and public education.

The Convention defines wise use of wetlands as the maintenance of their ecological character, achieved through the implementation of ecosystem approaches, within the context of sustainable development. Wise use can thus be seen as the conservation and sustainable use of wetlands and all the services they provide, for the benefit of people and nature.

Water insecurity is increasingly a cause of social and political instability threatening peace and security at all levels. The Geneva Water Hub aims at better understanding and preventing water-related tensions between competing uses, between public and private actors, and between political entities and countries.

The International Union for Conservation of Nature (IUCN) works in support of the Ramsar Convention but also with grassroots communities and river basin agencies to implement wetland conservation as part of its water management work.

IUCN also engages in water governance that integrates the needs of people and nature, the implementation of sustainable water resource management to secure water-related ecosystem services and conserve freshwater biodiversity, and support increased investment in ecosystems as natural water infrastructure.

The Economics of Ecosystems and Biodiversity (TEEB)

The Economics of Ecosystems and Biodiversity (TEEB) is a global initiative focused on making nature’s values visible. Its principal objective is to mainstream the values of biodiversity and ecosystem services into decision-making at all levels. It aims to achieve this goal by following a structured approach to valuation that helps decision-makers recognize the wide range of benefits provided by ecosystems and biodiversity, demonstrate their values in economic terms and, where appropriate, capture those values in decision-making.

The United Nations Water (UN Water) coordinates the efforts of UN entities and international organizations working on water and sanitation issues. All freshwater ultimately depends on the continued healthy functioning of ecosystems, and recognizing the water cycle as a biophysical process is essential to achieving sustainable water management.

WWF International works to preserve wetlands around the world, with its efforts focused on the Ramsar Convention. For the last 20 years, WWF has been one of the Convention’s most committed partners, supporting the designation of 110 million hectares of Ramsar sites across the world. WWF also believes it is critical to bolster the Ramsar Advisory Missions (RAMs), which help countries identify and address the wetland challenges they face.  RAMs need to be strengthened, supported, given adequate resources, and utilized by countries – as well as recommended by NGOs – to help ensure the ecological character of the world’s most important wetlands are maintained so that they continue to deliver benefits to both people and nature. In addition, WWF promotes climate change adaptation to help preserve and restore wetlands to buffer weather extremes and to integrate climate change considerations into wetlands and river basin management. WWF is working with local communities to assess their vulnerabilities to climate change and to develop strategies for climate adaptation.

Geneva celebrates World Wetlands Day each year by inviting the public to discover these natural spaces. Since 1991, the canton has hosted a site protected by the Ramsar Convention, a key area for biodiversity. In order to raise awareness of the value of this site, specialists representing different organizations involved in the safeguarding and monitoring of these spaces organize a series of activities and events led by ornithologists.

This year, the canton is offering 50 mini guides to encourage the public to observe the biodiversity and nature of wetlands in the region. In addition, they are organizing a photography contest showcasing local wetlands. Submit your entries until 10 February 2021 and win a pair of binoculars. More information on the Facebook page of the Department of Territory of the Canton of Geneva.

Ramsar Site: Rhône and natural valleys of the Allondon and the Laire

The Groupe des Jeunes de Nos Oiseaux brings together dozens of young people (up to 25 years old) who are passionate about birds, their observation in nature and their protection.

The Groupe Ornithologique du Bassin Genevois unites the ornithologists in the Geneva region and coordinates the various conservation projects of local birds. It also lists protected wetland sites for birdwatching in the canton and its surrounding area such as Marais de Sionnet and Les Teppes de Verbois among others.

The UN Decade on Ecosystem Restoration calls for the protection and revival of ecosystems around the world for the benefit of people and nature. It aims to halt the degradation of ecosystems, and restore them to achieve global goals. Only with healthy ecosystems, such as wetlands, can we enhance people’s livelihoods, counteract climate change, and stop the collapse of biodiversity.

The UN Decade runs from 2021 through 2030, which is also the deadline for the Sustainable Development Goals and the timeline scientists have identified as the last chance to prevent catastrophic climate change.

Led by the United Nations Environment Programme (UNEP) and the Food and Agriculture Organization (FAO) of the United Nations, the UN Decade is building a strong, broad-based global movement to ramp up restoration and put the world on track for a sustainable future. That will include building political momentum for restoration as well as thousands of initiatives on the ground.

The theme for the next United Nations Environment Assembly (UNEA 5), the world’s highest decision-making body on the environment, slated for February 2021, is Strengthening Actions for Nature to Achieve the SDGs.

Until 10 February 2021 | Facebook | Department of Territory, Canton of Geneva

Introductory Course to the Ramsar Convention on Wetlands