This virtual event, launching a new publication, was organized by the University of Geneva, IUCN CEESP, and the Geneva Environment Network, in parallel to the 49th Session of the Human Rights Council and in the run-up to the Convention of Biological Diversity resumed sessions of the twenty-fourth meeting of the Subsidiary Body on Scientific, Technical and Technological Advice (SBSTTA 24), the third meeting of the Subsidiary Body on Implementation (SBI 3) and the Openended Working Group on the Post-2020 Global Biodiversity Framework (WG2020-3), to be held in Geneva, from 13 to 29 March 2022.

One week before the critical global gathering to hammer out a new global biodiversity agenda in Geneva, a new report, Conservation NGOs at risk: The International Union for Conservation of Nature (IUCN) and shrinking environmental civic spaces, by the University of Geneva stresses the shrinking civic spaces, deteriorating conditions and attacks faced by conservation NGOs across the world. Based on a global survey and wider consultations with the NGO membership of the International Union for the Conservation of Nature, the report sheds light on the wide-spread patterns of both individual and organizational risks encountered.

At a time when the biodiversity conservation crisis is deepening, a silent crisis of NGOs struggling with harassment and shrinking spaces needs urgent attention. Building on on-going work to Geneva Roadmap 40/11 in support of environmental defenders, the report underlines the importance of enabling environments to secure effective and equitable conservation. This one-hour launch event presented the key findings by the author followed by hands-on perspectives from multiple NGO expert perspectives from around the world.

Founder & CEO, Foundation for the Preservation of Wildlife and Cultural Assets

Regional Director for Mexico, Central America and the Caribbean, IUCN

Representative to the United Nations in Geneva, Earthjustice | Moderator 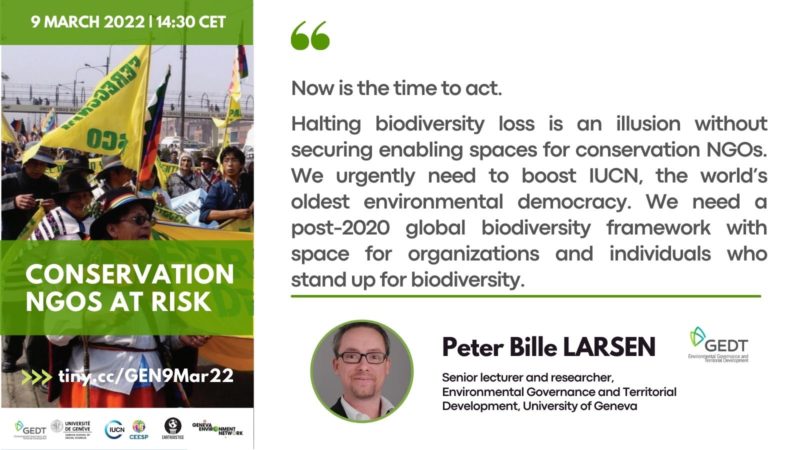 What can be our goals and targets?

Ruben KHACHATRYAN | Founder & CEO, Foundation for the Preservation of Wildlife and Cultural Assets

What actions can we do to follow-up on these?

How do you see the role of the IUCN in following up on the findings of the report?

What to do next?

Yves LADOR | Representative to the United Nations in Geneva, Earthjustice