The UN Biodiversity Conference, initially scheduled to take place in 2020, is taking place in two segments. The first part of the meetings took place from 11 to 15 October 2021, and the second part will convene in face-to-face meetings in Kunming, China from 25 April to 8 May 2022. This Executive Briefing provided the latest information on the preparations for the second part of the Conference, as well as the Subsidiary Bodies and Open-ended Working Group on the Post-2020 Global Biodiversity Framework meetings, scheduled to take place in-person in Geneva, in January 2022.

About the UN Biodiversity Conference

With the participation of almost 2,918 delegates in Kunming, and 2,478 connecting online, part one of the UN Biodiversity Conference closed on 15 October, setting the stage for the adoption of an effective post-2020 global biodiversity framework at the resumption of the meeting in Spring 2022.

The conference’s two-day High-Level Segment (12-13 October), opened with the announcement by Chinese President Xi Jinping of the 1.5 billion-yuan (about $233 million) Kunming Biodiversity Fund, saw the adoption of the Kunming Declaration, where Parties to the Convention on Biological Diversity committed to negotiate an effective post-2020 global biodiversity framework.

The resumed sessions of the 24th meeting of the Subsidiary Body on Scientific, Technical and Technological Advice (SBSTTA 24) and the 3rd meeting of the Subsidiary Body on Implementation (SBI 3) of the Convention on Biological Diversity (CBD), as well as the third Meeting of the Open-ended Working Group on the Post-2020 Global Biodiversity Framework (WG2020-3) will take place from 12 to 28 January 2022, at the International Conference Center Geneva in Geneva.

At this Executive Briefing, the CBD Executive Secretary highlighted the outcomes of the first part of the UN Biodiversity Conference as well as present the Convention workplan in the run-up to the second part of the conference, including the intermediary body meetings scheduled to take place in Geneva in 2022.

It was a virtual process of two weeks of 5 plenary sessions & 13 contact group sessions. It lead the process for the development of the post-2020 Global Biodiversity Framework (GBF) which builds upon the lessons from and will replace the biodiversity targets of the last decade.

Led by co-chairs from Uganda and Canada, the first meeting was held in Nairobi in 2019, and the second one in Rome in February 2020 before lockdowns happened. Consultations nonetheless continued virtually.

The third meeting was held virtually in the end of August and early September, where the goal was to get the views of all parties and stakeholders. This session, where participants are only asked to listen and not comment on other comments, will become the basis of negotiations of the next part of the third meeting in January in Geneva.

The Government of Colombia organized the pre-COP at the level of heads of state and government, which provided the momentum and political commitments of an ambitious post-2020 GBF. The meeting considered all elements of the first draft framework which was launched way back in July, including controversial issues such as digital sequencing information on genetic resources (still yet to be decided whether it will be a part of the framework).

Some of the key points of the 23 August to 3 September meeting:

The next steps of the process:

The Conference was conducted in a hybrid format with only delegates within China can participate in person, apart from the five from the Secretariat. There were delegations from 154 Parties to the Convention, including Parties to the two Protocols. The Secretariat ensured a consultative and open Conference, involving all stakeholders in discussions while ensuring the safety requirements related to COVID-19. Further preparations for physical meetings in 2022 have also been made. 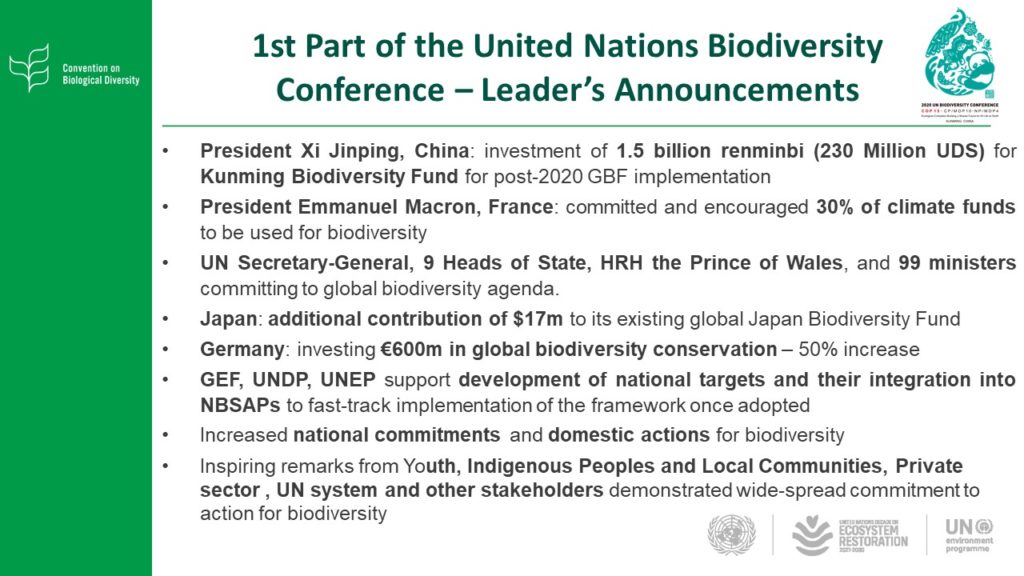 Other events that occurred during the Conference:

Roadmap 2022: Resumed sessions and 2nd part of United Nations Biodiversity Conference
Climate change and biodiversity are inseparable. A coherent message at UNFCCC COP-26 and UNCCD COP15 is needed to confront the biodiversity crises alongside the climate and land degradation crises.

As such, preparations for “in-person” sessions of the resumed meetings of the Subsidiary Bodies and Open-ended Working Group in Geneva (12-28 January 2022) are on their way. Resumed sessions will include formal negotiations to press ahead on outstanding issues. There will also be potential informal consultations ahead of Geneva to find common ground on issues.

While being prepared and adopted under the Convention on Biological Diversity, the post-2020 global biodiversity framework will serve as a universal framework for action on biodiversity by all stakeholders, organizations and related multilateral environmental agreements.

Discussing the Highlights of Summit Outcomes and Next Steps 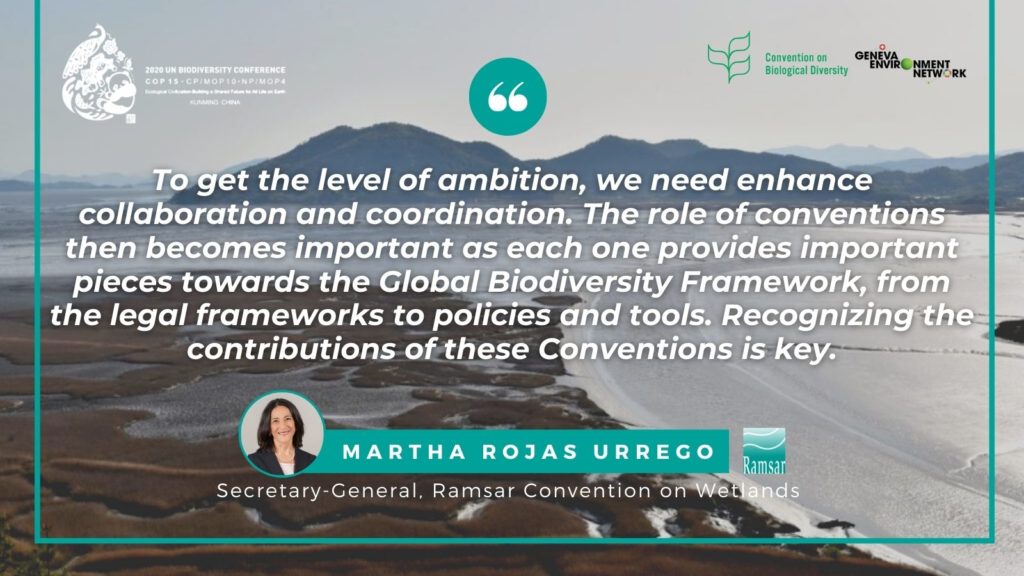 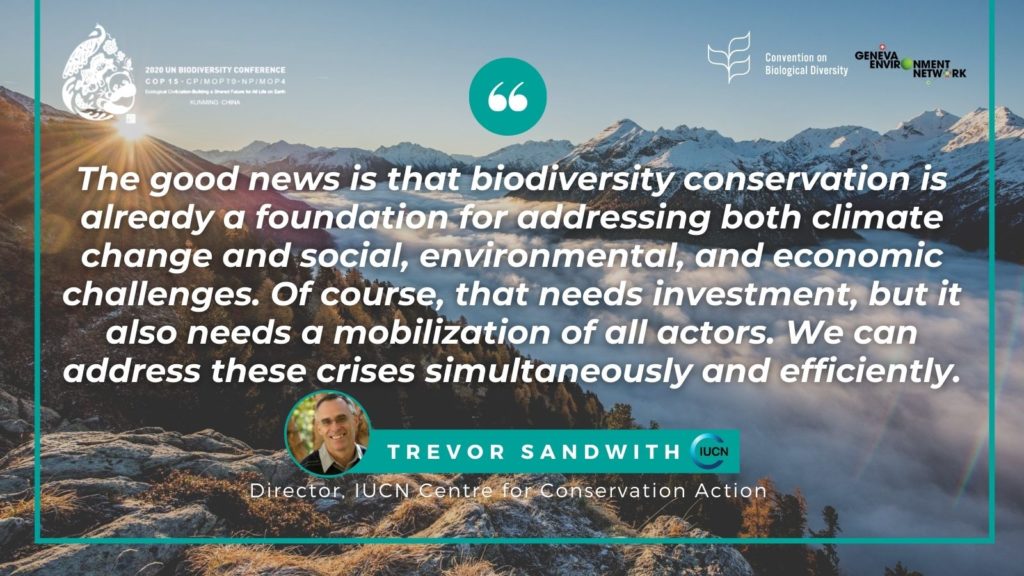 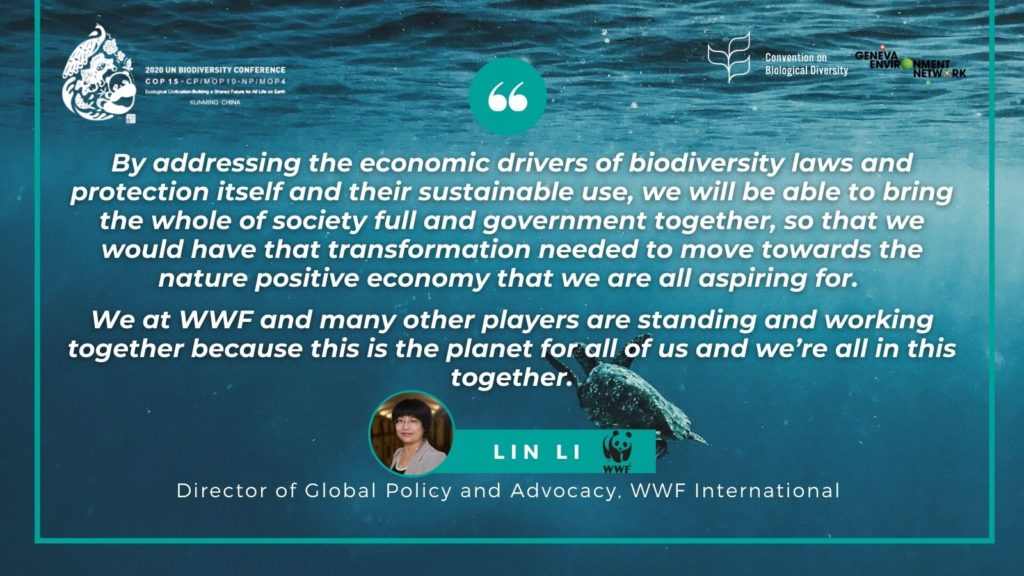 I was in Kunming to share the excitement and the movement onsite. I was encouraged by all the science and actions made, but there is still a lot more that needs to be done to restore the nature we are currently destroying. To achieve the theme of COP15 towards ecological civilization and building a shared future for all life on earth, I would like to share four points.

Therefore, I would just make a few suggestions of going forward as we head to the January meeting going to April meeting into part two of COP15, elements that should be reflected in the GBF:

By addressing the economic drivers of biodiversity laws and protection itself and their sustainable use, we will be able to bring the whole of society full and government together, so that we would have that transformation needed to move towards the nature positive economy that we are all aspiring for. We at WWF and many other players are standing and working together because this is the planet for all of us and we’re all in this together.

Due to lack of time, a question was also answered during the closing remarks.

Elizabeth MREMA: I will use this opportunity just to answer the question with regards to the chemicals and biodiversity (In keeping with the biodiversity “jigsaw” analogy, where do you see the chemicals related conventions & others playing a role in reaching biodiversity goals?). Please check targets 7, 16 and 19. 7 is specifically on reducing pollution from all sources including at least half from nutrients and two-thirds pesticides, also including the discharge of plastics, and relevant to that is target 16 and 19.

My key message here is, as I said at the beginning, the parties to the CBD are the parties to the other biodiversity and chemical conventions. They are the same governments. We will be meeting in general, both in person and virtual. So, let’s urge your parties to also participate and attend the January meetings.

Thank you very much for organizing this briefing and looking forward to continuing collaborating with you all as we move this common agenda forward.