The Geneva Beat Plastic Pollution Dialogues aim to facilitate further engagement and discussion among the stakeholders in International Geneva and beyond. In addition, they intend to address the plastic crisis and support coordinated approaches that can lead to more efficient decision making. This session, organized in partnership with the United Nations Environment Management Group (UN-EMG) and GRID-Arendal, featured the launch of the UN-EMG Report on mapping the UN response to marine litter and plastic pollution.

Various actors in Geneva are engaged in rethinking the way we manufacture, use, trade and manage plastics. The Geneva Beat Plastic Pollution Dialogues aim at outreaching and creating synergies among these actors, highlighting efforts made by intergovernmental organizations, governments, businesses, the scientific community, civil society and individuals in the hope of informing and creating synergies and coordinated actions. The dialogues highlight what the different stakeholders have achieved at all levels, present the latest research and governance options. In addition, the dialogues encourage increased engagement of the Geneva community in the run-up to various global environmental negotiations, including UNEA-5 in February 2021 and February 2022.

Building on the outcomes of the first series of dialogues and the recent policy developments, the Geneva Environment Network is hosting a second series of events to facilitate further engagement and synergies on tackling the plastic crisis. These events are held in collaboration the Basel, Rotterdam and Stockholm Conventions Secretariat, the Center for International Environmental Law, the Global Governance Centre at the Graduate Institute, IUCN, Norway, Switzerland, and the Forum on Trade, Environment & the SDGs (TESS).

Plastic pollution has become a global concern, as our planet is drowning in plastic waste and microplastics. The dramatic consequences of plastic pollution on biodiversity, human health, economic activities and livelihoods cannot be left unaddressed. As plastic production is expected to continue rising exponentially in the coming decades, the need to develop effective solutions at the local, national, and global level is pressing.

Upon a mandate given by UNEA4, the United Nations Environment Management Group (EMG) contributed to the work of the AHEG by providing a mapping of all relevant UN agencies, programmes, initiatives and other sources of expertise relating to marine litter, including plastic litter and microplastics. This comprehensive mapping aims to contribute to a better understanding of activities across the UN and related entities, identify synergies and opportunities for potential collaboration among UN entities and strengthen the base for improved coordination and joint programmatic initiatives and planning on marine litter and microplastics in the UN System.

A new report released by the UN Environment Management Group, “Addressing marine litter and microplastics: UN system-wide contributions”, shows that the UN System is committed to tackle the challenges presented by global plastic pollution, and to promoting and coordinating action to address it holistically through the UN system and in action on the ground. Over 40 UN entities are supporting Member States in reducing and addressing marine litter and microplastics. These activities are effective because the UN System possesses considerable expertise across a range of relevant disciplines.

This event showcased how UN Agencies are working collaboratively to help countries address the issue systemically across the lifecycle. It suggested how this collaboration could be further strengthened vertically and horizontally, to help institutionalize innovative and circular approaches to the management of plastics in a more sustainable way.

H.E. Amb. Tine MØRCH SMITH | Permanent Representative of Norway to the UN and other International Organizations in Geneva 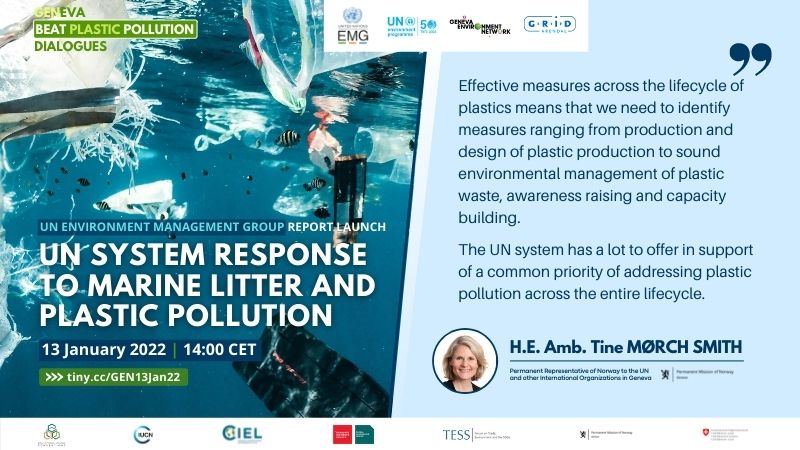 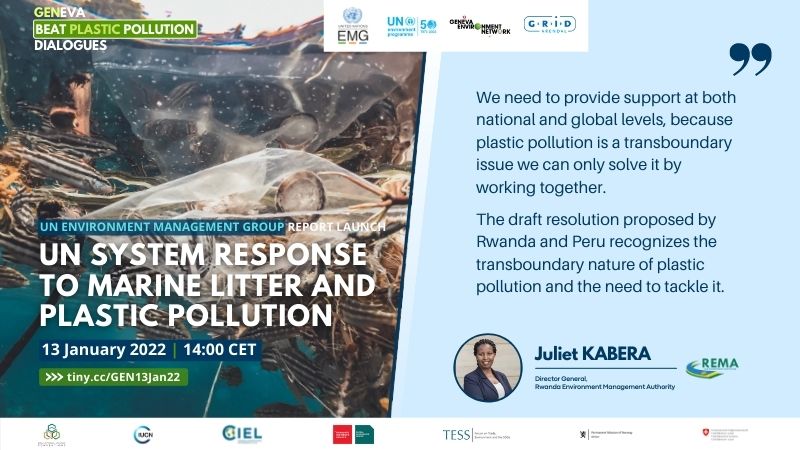 There is a need to increase the awareness and understanding of dangers of plastic pollution as well as the solutions and technologies to fast track development of alternatives. We need to foster behavioral change in communities by investing in grassroots initiatives. We need to put in place robust legal frameworks at both national and global levels. Because plastic pollution is a transboundary issue, we can only solve it by working together.

Introduction and Setting the Scene 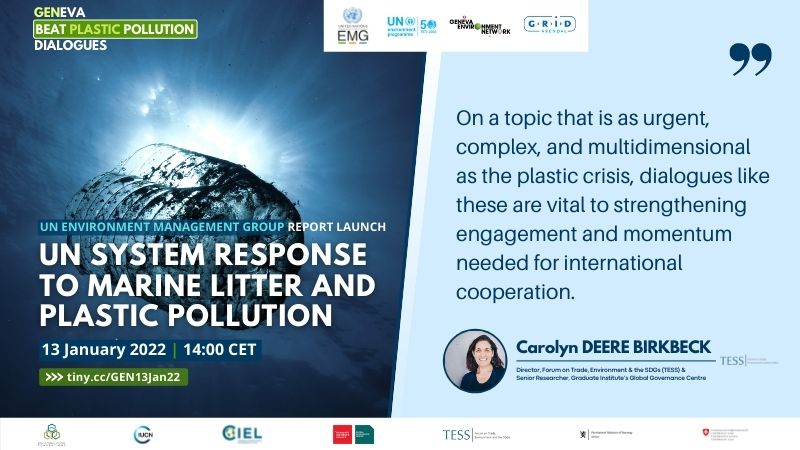 On a topic that is as urgent, complex, and multidimensional as the plastic crisis, dialogues like these are vital to strengthening engagement and momentum needed for international cooperation.

Remarks on the Report 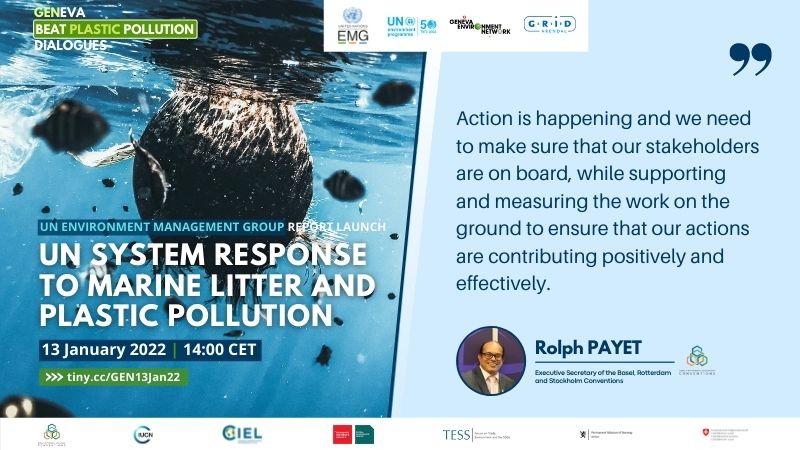 Action is happening and we need to make sure that our stakeholders are on board, while supporting and measuring the work on the ground to ensure that our actions are contributing positively and effectively. 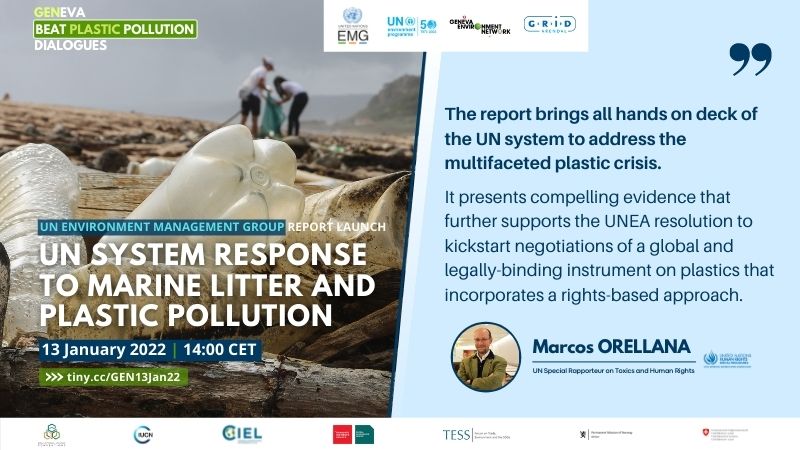 From the human rights perspective, what are the key challenges of plastic pollution?

The report brings all hands on deck of the UN to address the multifaceted plastic crisis. The report presents compelling evidence that further supports the UNEA resolution to kickstart negotiations of a global and legally-binding instrument on plastics that incorporates a rights-based approach. 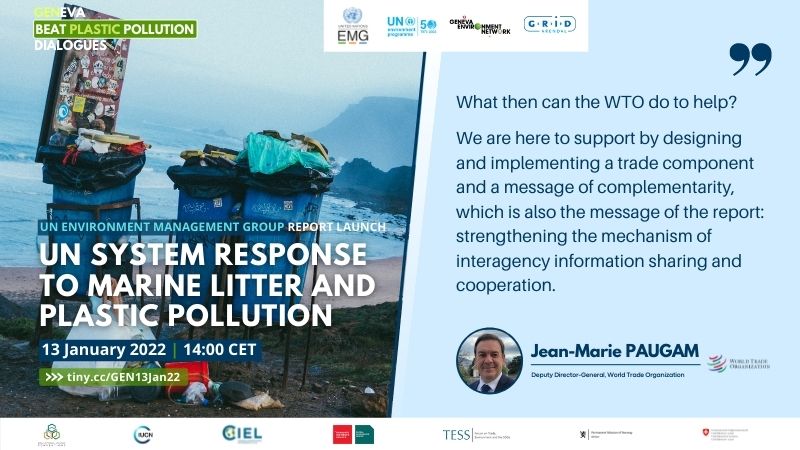 What then can we do to help? I first want to insist on the notion of helping because it’s clear for us that the WTO is not the place where a global strategy against plastic pollution will be elaborated. We are here to support by designing and implementing a trade component and a message of complementarity, which is also the message of the report, as seen last year when we had welcomed at the WTO a preparatory session of the next UNEA 5 session in cooperation with UNEP. Some of our members were afraid at one point of the risk of duplications of efforts, but we believe that the complementarity is there, and the risk of duplication is being lessened. I insist on this because this is one of the recommendations in the report: strengthening the mechanism of interagency information sharing and cooperation. 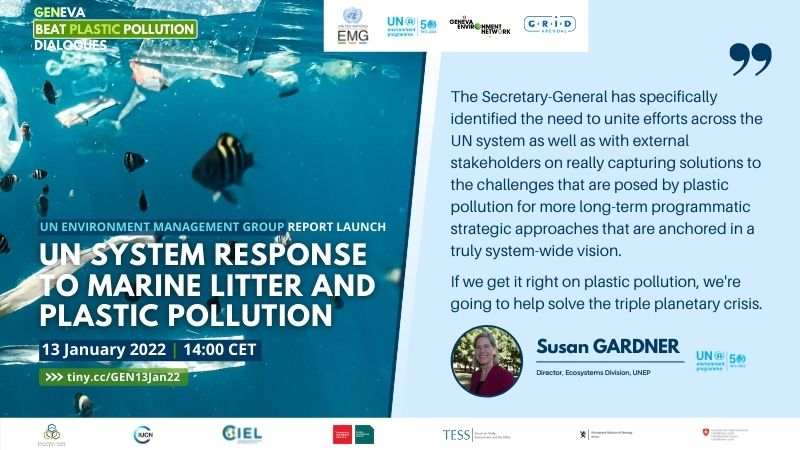 The Secretary-General has specifically identified the need to unite efforts across the UN system as well as with external stakeholders on really capturing solutions to the challenges that are posed by plastic pollution for more long-term programmatic strategic approaches that are anchored in a truly system-wide vision. If we get it right on plastic pollution, we’re going to help solve the triple planetary crisis. 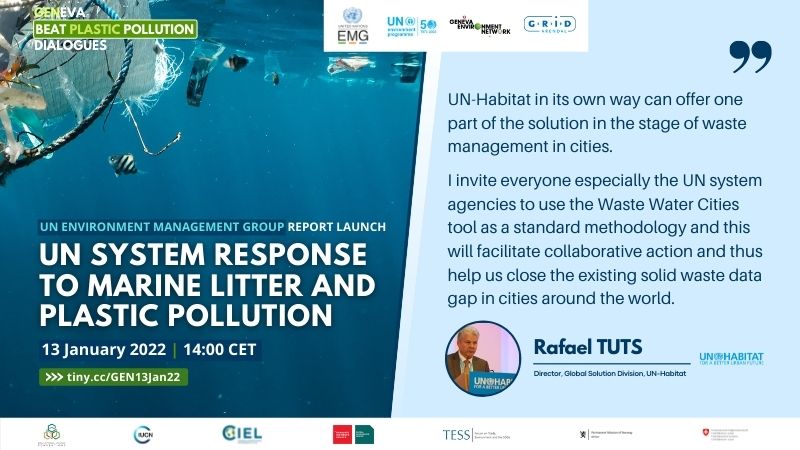 I invite everyone especially the UN system agencies to use the Waste Water Cities tool as a standard methodology and this will facilitate collaborative action and thus help us close the existing solid waste data gap in cities around the world. 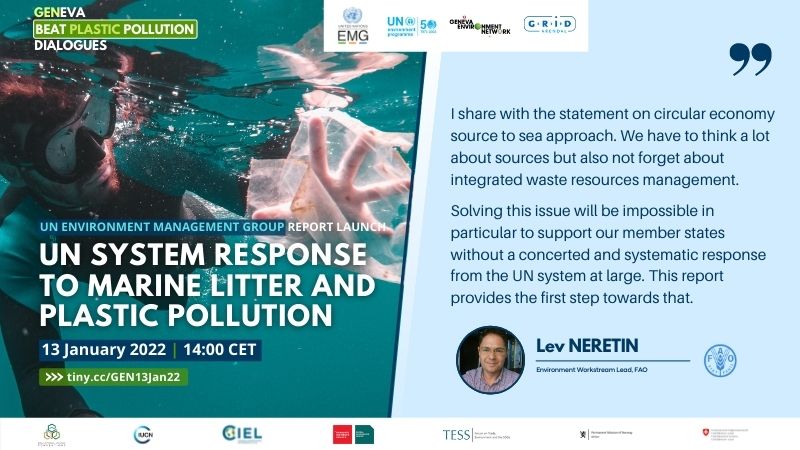 I share with the statement on circular economy source to sea approach. We have to think a lot about sources but also not forget about integrated waste resources management. Solving this issue will be impossible in particular to support our member states without a concerted and systematic response from the UN system at large. This report provides the first step towards that. 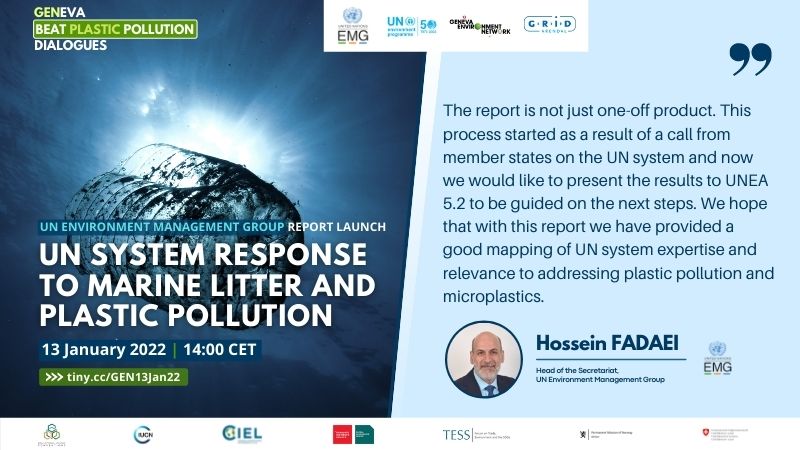 The report is not just one-off product. This process started as a result of a call from member states on the UN system and now we would like to present the results to UNEA 5.2 to be guided on the next steps. We hope that with this report we have provided a good mapping of UN system expertise and relevance to addressing plastic pollution and microplastics. Hopefully, we would then take the next steps forward with the guidance that we will receive from member states.

Additional questions not answered during the event

Q: There is a significant absence of the cultural & artistic presences found in both the communities and society generally. The art & culture sector is ready to mobilize on a very large scale level both nationally & internationally. This must be taken more seriously in the examination of solutions that are put on the table. They in fact both the key and the pathway into the societies -when will this be taken fully seriously?

The President of the United Nations General Assembly convened on 21 May 2021 a one-day high-level event on Culture and Sustainable Development in partnership with UNESCO. This event, which was held on the World Day for Cultural Diversity for Dialogue and Development, highlighted the resilient and transformative role of culture as an accelerator of SDG implementation, as well as the challenges within the cultural and creative industries and the broader cultural ecosystem. It, inter alia, provided the opportunity for Member States to share experiences, identify implementation gaps and solutions; and call for strengthening strategic cross-sectoral partnerships to unlock the transformative potential of culture in the recovery context and throughout the Decade of Action.

Q: One overaching principle regarding the plastic crisis is environmentally sound management (ESM), mostly related to waste issue but also include waste minimization and precautionary element. My question is, can ESM and its element as a principle goes beyond the waste dimension barrier and adapted into the global convention on plastic?

The principle of environmentally sound management of plastic waste is an important principle that also includes waste minimization and waste prevention. A new global agreement will be an important measure to ensure more sustainable management of plastics across the entire value chain of plastics. The Nordic Council of Ministers for Climate and Environment have prepared a Nordic report on how sustainability criteria for plastic products could form an important part of a new global agreement. This report looks at what sustainability entails for plastic products across the entire life-cycle from production and design through the waste and end-of-life phases. This report will be launched in 27 January in a Warm-up for UNEA5.2 event hosted by Norway and GRID-Arendal.