The Geneva Beat Plastic Pollution dialogues aim to facilitate further engagement and discussion among the stakeholders in International Geneva and beyond. In addition, they intend to address the plastic crisis and support coordinated approaches that can lead to more efficient decision making.

Various actors in Geneva are engaged in rethinking the way we manufacture, use, trade and manage plastics. These dialogues aim at outreaching and creating synergies among these actors, highlighting efforts made by intergovernmental organizations and governments, businesses, the scientific community, civil society and individuals in the hope of informing and creating stronger synergies and coordinated actions. The dialogues will also look at what the different stakeholders have achieved at all levels, present the latest research and governance options.

In addition, although the dialogues target stakeholders from all continents, they primarily aim to encourage increased engagement of the Geneva community in the run-up to various global environmental negotiations, such as:

The first series of dialogues took place from November 2020 to February 2021, to build momentum towards the first session of UNEA-5. It aimed to facilitate further engagement and discussions among the International Geneva stakeholders and actors across the regions and support coordinated approaches that can lead to more efficient global decision making. It also intended to provide a platform to further carry the discussion from the recently conclude Ad Hoc Open-Ended Expert Group (AHEG) on Marine Litter and Microplastics towards UNEA-5 part 2 in 2022.

The first series of dialogues were organized in collaboration with the Basel, Rotterdam and Stockholm Conventions Secretariat, the Center for International Environmental Law, the Global Governance Centre at the Graduate Institute, Norway, and Switzerland.

Building on the outcomes of the first series of dialogues and the recent policy developments, the Geneva Environment Network will continue to facilitate further engagement and synergies on tackling the plastic crisis, in cooperation with its partners.

With the Ministerial Conference on Marine Litter and Plastic Pollution convening in hybrid format, with a core presence in Geneva, on 1-2 September 2021 and other formal and informal discussions ongoing in various fora, including trade, Plastic remains high on international Geneva agenda.

The second series of dialogues is organized in collaboration with: the Basel, Rotterdam and Stockholm Conventions Secretariat; the Center for International Environmental Law; the Global Governance Centre at the Graduate Institute; IUCN; Norway; Switzerland; and the Forum on Trade, Environment & the SDGs (TESS). 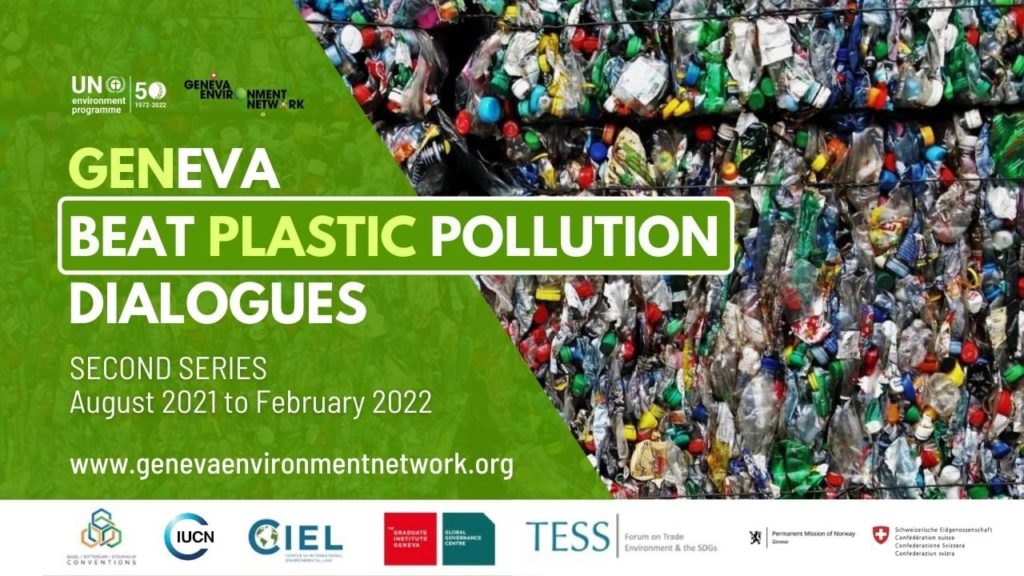 Plastics and the Environment

Our Plastics and the Environment update lists relevant information, research, data and/or press releases issued by our partners in Geneva and other institutions around the world.