Wednesdays for the Planet is a series of online screenings and virtual presentations with experts highlighting the natural world and other environmental challenges our planet faces. The virtual screenings are for educational purposes, non-profit and non-commercial. This session is held within the framework of the UN Decade on Restoration and World Environment Day celebrations.

The Geneva Environment Network and the Geneva institutions will celebrate World Environment Day through various activities in early June with the participation of various stakeholders. Visit our update for details and suggestions on how to celebrate the day.

A documentary by Vincent Perazio and produced by ARTE France and the production company Bonne Pioche, the documentary provides a comprehensive overview of rewilding in Europe. Against all expectations, large wildlife seems to be reconquering Europe. For the last 10 years, scientists have noted a spectacular return of wild animals in Europe and, today, they have decided to speed up this process, and extol a new approach in ecology: Rewilding. It is a new paradigm, a new way of associating ourselves with nature in Europe.

But to what extent can we give back European ecosystems their complexity and richness? Based on the restoration of natural processes and the recovery of wild nature, the documentary  highlights contemporary European rewilding efforts and the latest views, insights and lessons from a wide range of experts.

It takes us across Europe with a range of European rewilding areas and initiatives, including the Southern Carpathians in Romania, the Greater Côa Valley in Portugal, Knepp Estate in the United Kingdom, and the Oostvaardersplassen in the Netherlands. The documentary is an exciting quest to understand the human, scientific and environmental stakes that lie behind this idea of a new Utopia. The first film about rewilding, it invites viewers to discover this resolutely revolutionary way of managing nature, one of this millennium’s most exciting, and also most controversial, visions.

The film is available in French at Radio Télévision Suisse (RTS) until 16 June 2021. We would like to thank RTS for their support. 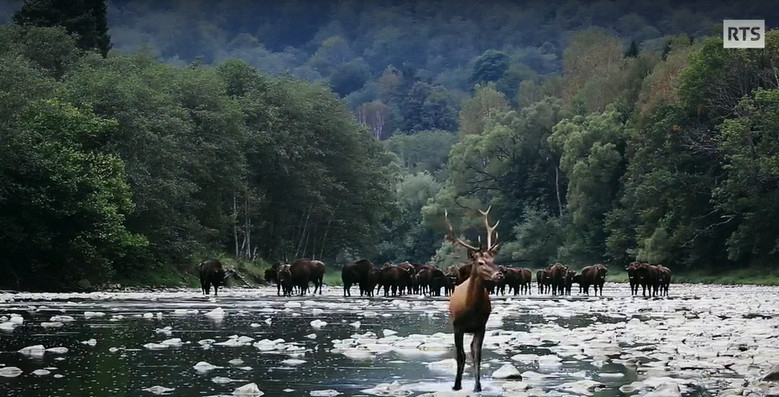 Ersin Esen has 23 years of experience in development planning, strategic management planning, project cycle management, project evaluation, capital budgeting and international negotiations. He has been with the United Nations Environment Programme (UNEP) since 2011. As a Task Manager, he is responsible for developing projects together with internal and external clients. He also supervises project implementation. He manages a project portfolio of around 25 million US dollars implemented in 16 countries. Prior to this position with UNEP, Ersin worked as a development planning expert in the State Planning Organization of Turkey, where he worked on policy analysis and development, investment budgeting, planning and programming.

Ersin holds a Bachelor of Science in Civil Engineering and Master of Business Administration degrees from Middle East Technical University, Turkey and a Master of Public Policy degree from Harvard University.

Molly Grace is a NERC Knowledge Exchange Fellow at the Department of Zoology of the University of Oxford  and she is the Task Force Coordinator for the Green Status of Species (previously called ​the Green List of Species) of the International Union for Conservation of Nature (IUCN), which will be a new set of metrics for assessing successful conservation. Currently, conservation success is measured in terms of the outcome we wish to avoid (extinction) rather than the outcome we wish to achieve: the recovery of populations carrying out their ecological roles throughout their indigenous range. The Green Status of Species will provide objective criteria to assess progress toward full species recovery ​and be part of the Red List of Threatened Species.

Tobias Blaha is the Director of the Bioparc Genève where he works as a veterinarian, an expert animal keeper (on both the federal and cantonal levels), a research director and a business manager. His main motivation is animal welfare and species conservation, relentlessly working on education, conservation, and research projects for both exotic and local species, through partnerships around the world. In that context, Tobias and his team have been awarded in 2019 by the Jane Goodall’s Roots & Shoots Challenge concerning the Wonder Fauna collaborative project on local biodiversity conservation. As a part of both the Stratégie Biodiversité 2030 and the Convention on Biological Diversity of the United Nations, he is now leading several high impact and innovative research projects, such as the morphological description of the west African crocodile, the hedgehogs’ population census, the lemurs’ welfare indicators, and the social behavior of cotton-top tamarins. Together with his young and dynamic team, his vision is to create a completely sustainable park, where the next generation will learn to know and to love different species of fauna and flora from around the world. Tobias is a graduate of the Ludwig-Maximillians University in Munich, Germany.

Anne-Sophie Deville is a scientific collaborator at the Bioparc Genève where she takes part in different projects such as its education program and communications. Her focus is on research and conservation programs, animal rewilding and creating bridges between science, conservation and people. She has seven years of experience in science popularization and believes that good wildlife science dissemination is essential in raising awareness on nature conservation.