Plastic pollution is a global problem which requires a global response. International cooperation to address the plastic crisis has been increasing over the past year. Notably, the negotiation process toward a treaty to end plastic pollution is underway. This page is part of our Plastics and the Environment series, a set of online resources on the plastics crisis, its impact on people and the environment, and international cooperation to address this global problem. They include resources and news from organizations in Geneva and beyond, including UN-system organizations and other IOs, governmental authorities, civil society organizations, academic institutions and journals, and renowned newspapers.

A Global Response to a Global Challenge

As the evidence of the presence of plastics in all ecosystems around the world and its impacts on people and the environment is growing, the plastic crisis has become a central point of global attention. Various initiatives have emerged to tackle the problem. In particular, marine litter and microplastics have been on the agenda of the UN Environment Assembly for several years. The topic is also addressed in many other fora, including under the Basel, Rotterdam and Stockholm Convention, the UN Ocean Conferences, the World Trade Organization, the Special Procedures of the Office of the High Commissioner on Human Rights, and other major avenues of global governance. This page focuses specially on the UNEA processes and other major processes related to Geneva; further information on specific issues such as human rights, trade, etc, are available in our Plastics and the Environment resources.

Momentum Toward a Global Treaty

Considering the breadth and transboundary nature of the plastic crisis, it has become clear that global coordinated action is key to halt further plastic pollution. While voluntary initiatives have helped raise the political momentum on the issue, they remain insufficient to effectively and comprehensively tackle this crisis. Moreover, efforts to address plastic pollution have long been fragmented and focused on downstream measures, thus failing to deal with the problem at a systemic level. Thus, actors from all parts of society – academia, civil society, private sector, international organizations, etc – started calling for the establishment of an international legally binding instrument on plastics.

For several years, plastic pollution has been a major issue raised at the UN Environment Assembly (UNEA). In 2017, UNEA-3 established the Ad-hoc Open-Ended Expert Group on marine litter and microplastics, whose mandate was extended at UNEA-4 and whose work was concluded ahead of UNEA-5 in 2021. After the first Ministerial Conference on Marine Litter and Plastic Pollution, organized in September 2021 in Geneva, Peru and Rwanda presented a draft resolution, which gathered the support of more than 60 Member States. In December 2021, Japan also proposed an alternative draft resolution. The two were merged before the beginning of the negotiations at UNEA-5.2. On 2 March 2022, 175 countries participating in UNEA-5.2 got together and adopted the resolution End plastic pollution: towards an international legally binding instrument. This historic resolution mandates UNEP Executive Director to convene an International Negotiating Committee (INC) to develop and adopt a legally binding instrument on plastic pollution based on a comprehensive approach that addresses the full life cycle of plastics. 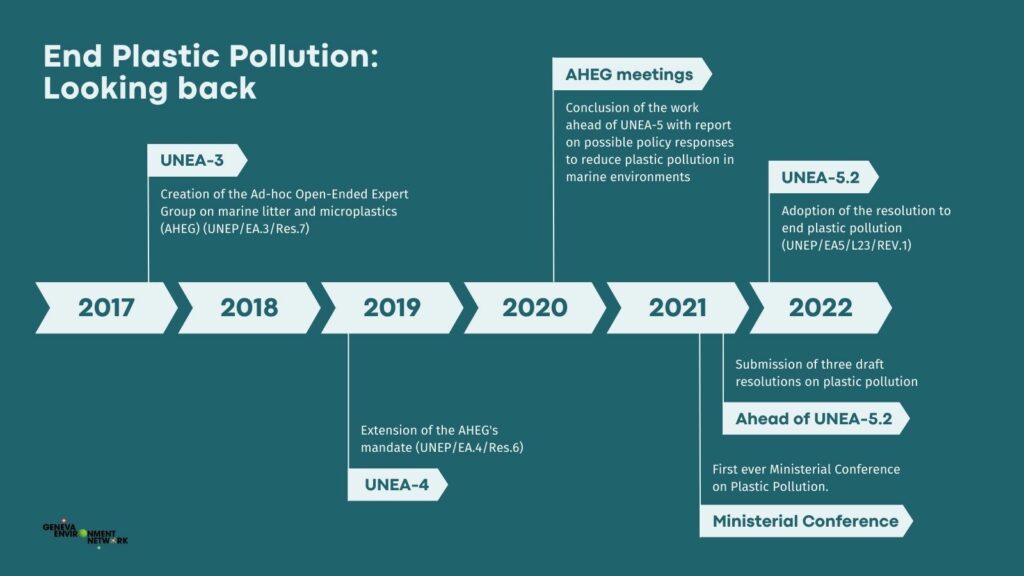 Toward an International Treaty to End Plastic Pollution

UNEA made history in March 2022, by adopting a resolution setting up the path to a global treaty to end plastic pollution.  The resolution requests the convening of an intergovernmental negotiating committee (INC) to develop an international legally binding instrument on plastic pollution, including in the marine environment, during the second half of 2022, with the ambition of completing its work by the end of 2024. The ad-hoc open-ended working group (OEWG) convened in Dakar, Senegal, in May 2022 to prepare for the work of the INC; the outcomes include draft rules of procedure for the work of the INC.

The INC-1 will be held in Punta del Este, Uruguay from 28 November to 2 December 2022. Member States, members of Specialized Agencies and relevant stakeholders are invited to make submissions for the INC-1; these can be found on the meeting website, alongside information on accreditation and registration (deadline: 31 October 2022).

On 22 August 2022, Rwanda and Norway launched a High Ambition Coalition to End Plastic Pollution, as announced at UNEA-5. The coalition will work towards an ambitious international treaty on plastic pollution through three key strategic goals: (1) restrain plastic consumption and production to sustainable levels, (2) enable a circular economy for plastics that protects the environment and human health, and (3) achieve environmentally sound management and recycling of plastic waste.

The private sector is also mobilized in the negotiations. Convened by the Ellen MacArthur Foundation and WWF, the Business Coalition for a Global Plastics Treaty brings together businesses and financial institutions committed to supporting the development of an ambitious, effective and legally binding UN treaty to end plastic pollution. 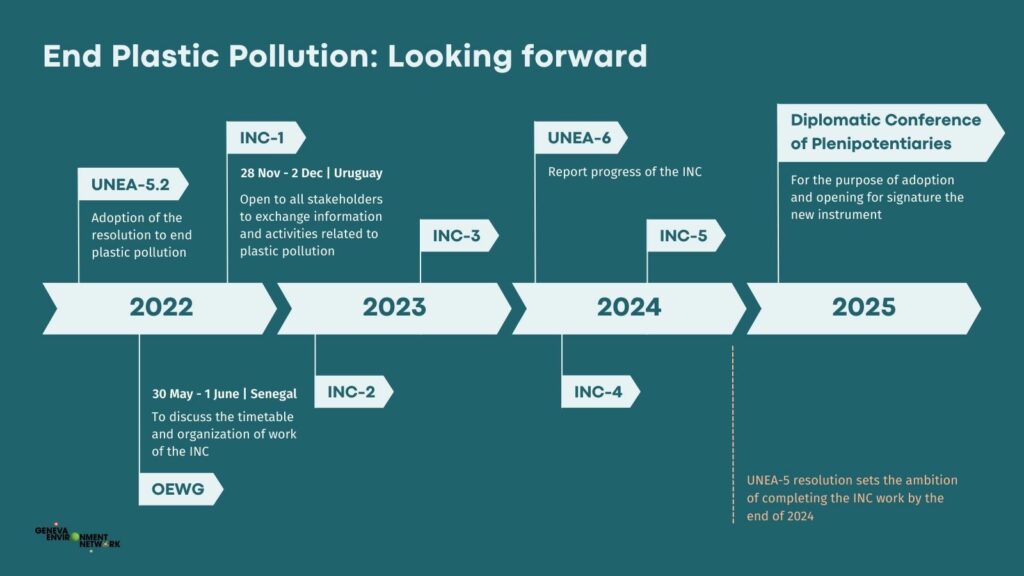 While concerns over plastic pollution emerged mostly in relation to marine litter and microplastics, and the issue of plastics in the ocean remains an important aspect on the international agenda, recent research has highlighted the impacts of plastics on other ecosystems and on people’s health. The new treaty under negotiations could be an opportunity to better protect human health from the risks associated with plastics. Various actors are thus promoting further research and increased cooperation on plastics and health.

In Focus | Plastics and Health

Rather than the end of the journey, the UNEA resolution represents a new turning point, from which much work still has to be done. Through the Geneva Beat Plastic Pollution Dialogues, the Geneva Environment Network and it partners support actors in the Geneva community and beyond, engaged in this process.

Plastics in the Basel Convention

The Basel Convention on the Control of Transboundary Movements of Hazardous Wastes and Their Disposal is an international agreement aiming to protect human health and the environment against the adverse effects of hazardous waste. It was adopted in 1989 in response to growing concerns about the exports of toxic waste to developing countries.

In 2019, the 14th Conference of the Parties adopted the Plastic Waste Amendments, with the objectives of enhancing the control of the transboundary movements of plastic waste and clarifying the scope of the Convention as it applies to such waste. The amendments entered into force in January 2021. The Basel Convention also established a Plastic Waste Partnership which aims to mobilize resources, interests and expertise from all parts of society to improve and promote the environmentally sound management of plastic waste at the global, regional and national levels and to prevent and minimize its generation.

Plastics at the World Trade Organization

In November 2020, a group of WTO members launched an informal dialogue to explore how the WTO could contribute to efforts to reduce plastics pollution and promote the transition to more environmentally sustainable trade in plastics. The Informal Dialogue on Plastics Pollution and Environmentally Sustainable Plastics Trade (IDP) is open to all WTO members and seeks to complement discussions in the Committee on Trade and Environment (CTE) and other fora. As of July 2022, 73 WTO members are participating in the informal dialogue. In December 2021, the Members issued a Ministerial Statement on plastic pollution, highlight the key areas of work for the IDP.  These include: how to improve transparency of plastic trade flows, supply chains and trade policies; strengthening regulatory cooperation with other international bodies; identifying environmentally sustainable trade policies and mechanisms; and strengthening trade-related technical assistance for vulnerable economies, including least-developed countries (LDCs) and Small Island Developing States (SIDS).

In Focus | Plastics and Trade

Plastic pollution is a crisis that affect all parts of society, and as such many initiatives and campaigns have emerged to address the problem and eliminate plastic pollution. These initiative stem from international organizations, but also civil society organizations and the private sector.

Plastic pollution varies greatly from one country to the next, both in terms of scale and impacts of plastic pollution, as well as their financial and technical capacity to address these. Therefore, any new global instrument requires carefully designed mechanisms that can effectively address these challenges. In particular, technical and financial resources will be needed to support decision-making and assist developing countries and economies in transition to implement the global responses that will be negotiated to address the plastic crisis.

Many actors in Geneva are actively working to address the plastic crisis at the global and local level. As a hub of environmental and health governance, Geneva plays an important role in the multilateral processes to address plastic pollution. Geneva also hosted the first ever Ministerial Conference on Marine Litter and Plastic Pollution in September 2021. Discover the international and local organizations that are active on the topic in our special “In Focus” page below.

In Focus | Addressing the Plastic Crisis from Geneva

The Geneva Beat Plastic Pollution dialogues aim at outreaching and creating synergies among these actors, highlighting efforts made by intergovernmental organizations and governments, businesses, the scientific community, civil society and individuals in the hope of informing and creating stronger synergies and coordinated actions. By presenting latest research, achievements and governance options, the dialogues dialogues aim to facilitate further engagement and discussion among the stakeholders in International Geneva and beyond. As such, they support coordinated approaches to address the plastic crisis that can lead to more efficient decision making.