The Geneva Beat Plastic Pollution Dialogues aim to facilitate further engagement and discussion among the stakeholders in International Geneva and beyond. In addition, they intend to address the plastic crisis and support coordinated approaches that can lead to more efficient decision making. This session was held on the occasion of International Mountain Day. (Photo ©Jason Sheldrake)

Various actors in Geneva are engaged in rethinking the way we manufacture, use, trade and manage plastics. The Geneva Beat Plastic Pollution Dialogues aim at outreaching and creating synergies among these actors, highlighting efforts made by intergovernmental organizations, governments, businesses, the scientific community, civil society and individuals in the hope of informing and creating synergies and coordinated actions. The dialogues highlight what the different stakeholders have achieved at all levels, present the latest research and governance options. In addition, the dialogues encourage increased engagement of the Geneva community in the run-up to various global environmental negotiations, including UNEA-5 in February 2021 and February 2022.

Building on the outcomes of the first series of dialogues and the recent policy developments, the Geneva Environment Network is hosting a second series of events to facilitate further engagement and synergies on tackling the plastic crisis. These events are held in collaboration the Basel, Rotterdam and Stockholm Conventions Secretariat, the Center for International Environmental Law, the Global Governance Centre at the Graduate Institute, IUCN, Norway, Switzerland, and the Forum on Trade, Environment & the SDGs (TESS).

While much attention in recent years has focused on the impacts of plastic waste on the world’s oceans, pollution in mountain regions has rarely made the headlines. Meanwhile, plastic is the most common type of waste found in mountains. The rapid increase of plastic waste in these region is drive, to a large extent, by tourism. While tourism is an important source of income especially for developing countries, its plastic waste footprint tends to far exceed that of local populations, thus becoming high priority for those countries. Adding to the plastic waste burden that mountains are already shouldering, is the spread of microplastics, which travel long distances and often end up on mountains like the Tibetan Plateau, the Alps or the Rockies.

Meanwhile, mountainous regions face specific challenges in addressing plastic waste due to their remoteness, limited access to human and financial resources, lack of economies of scale, and challenging natural conditions. Many mountainous regions, especially in developing countries, have limited capacity and infrastructure to prevent the generation of plastic waste and ensure its environmentally sound management. This often leads to open burning and dumping.

Yet, success stories and innovative approaches exist and are already being implemented across the world, including the remotest mountains: Garbage declaration and clearance systems for mountain expeditions, community-run collection centers, recycling of bottles into ponchillas, engaging mountaineers in cleanup operations, and full-cycle infrastructure for waste-sorting and management in national parks.

Ahead of the International Mountain Day, celebrated on 11 December, this dialogue provided an opportunity to put mountains in the spotlight of the global efforts to address plastic pollution. It served as an opportunity to present the key conclusions of a draft report being finalized under the project Plastic Waste in Remote and Mountainous Areas (financed by the Governments of Norway and France), captivating findings of the 2021 Global Mountain Waste Survey, 10 steps to be a Mountain Hero and compelling insights of mountaineers. The speakers addressed the following topics:

By order of intervention

Programme Officer, Secretariat of the Basel, Rotterdam and Stockholm Conventions 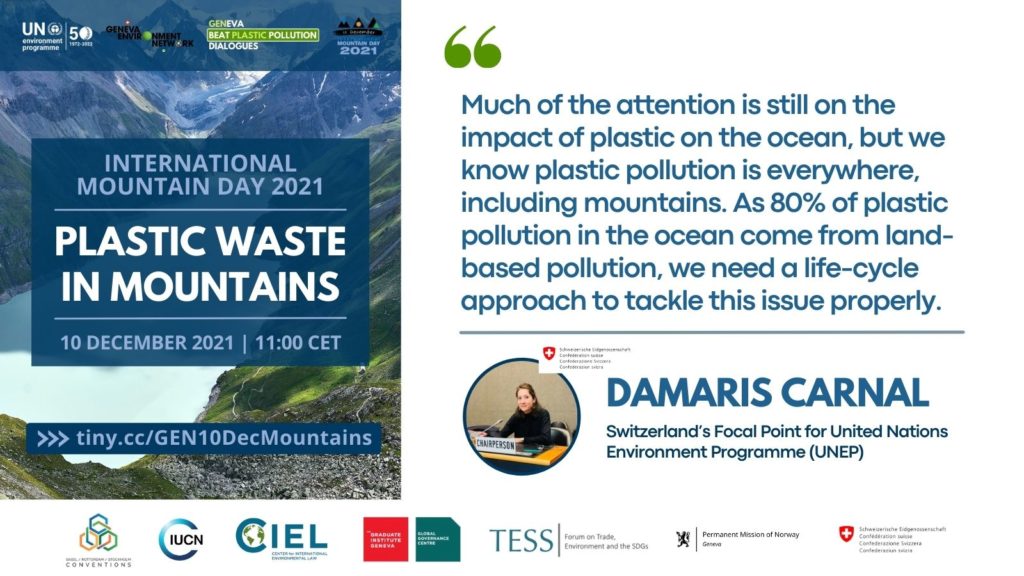 Plastic Waste in Mountains – From Challenges to Solutions 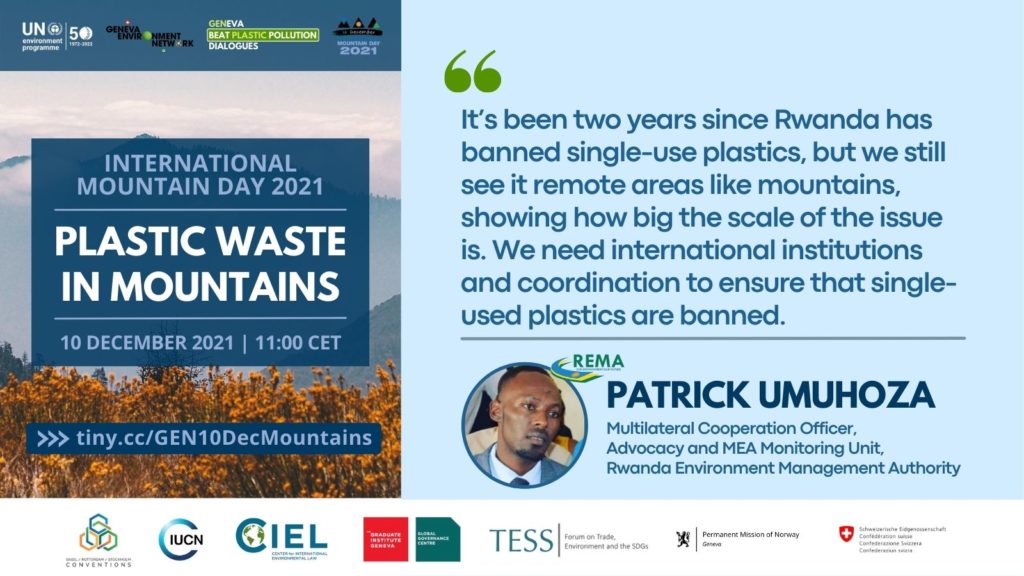 Results of the 2021 Global Waste in the Mountains Survey | Björn Alfthan, Grid-Arendal 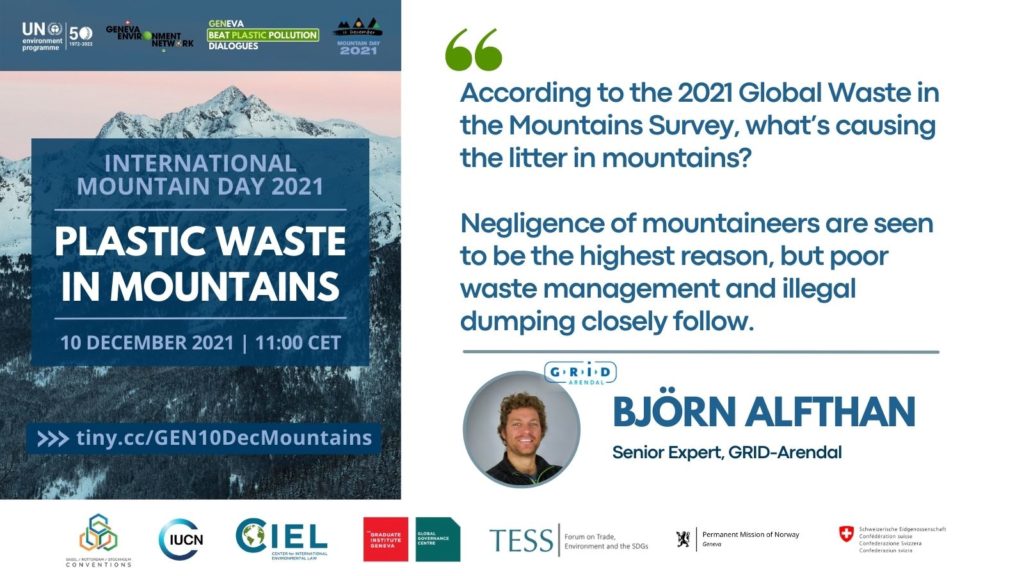 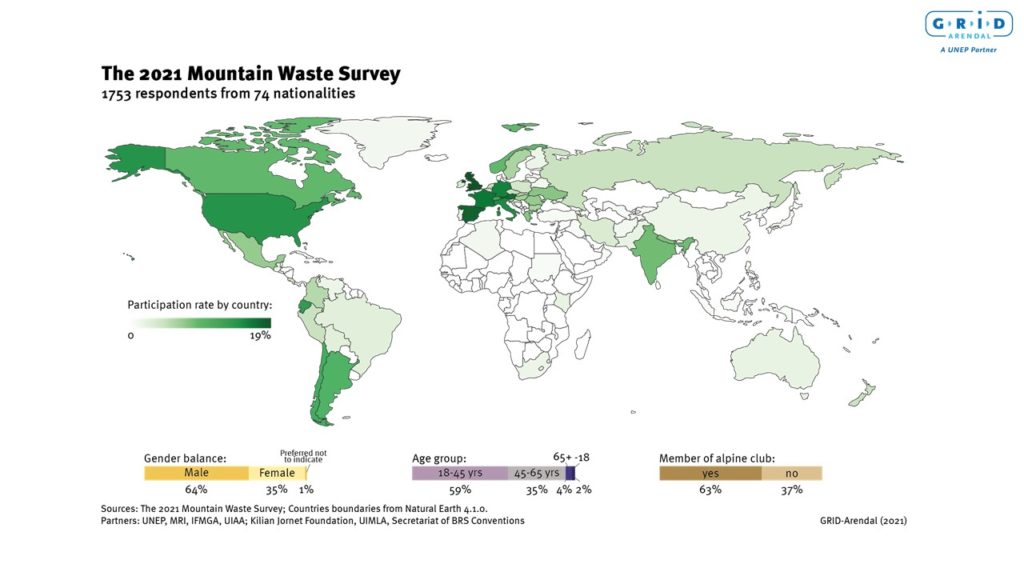 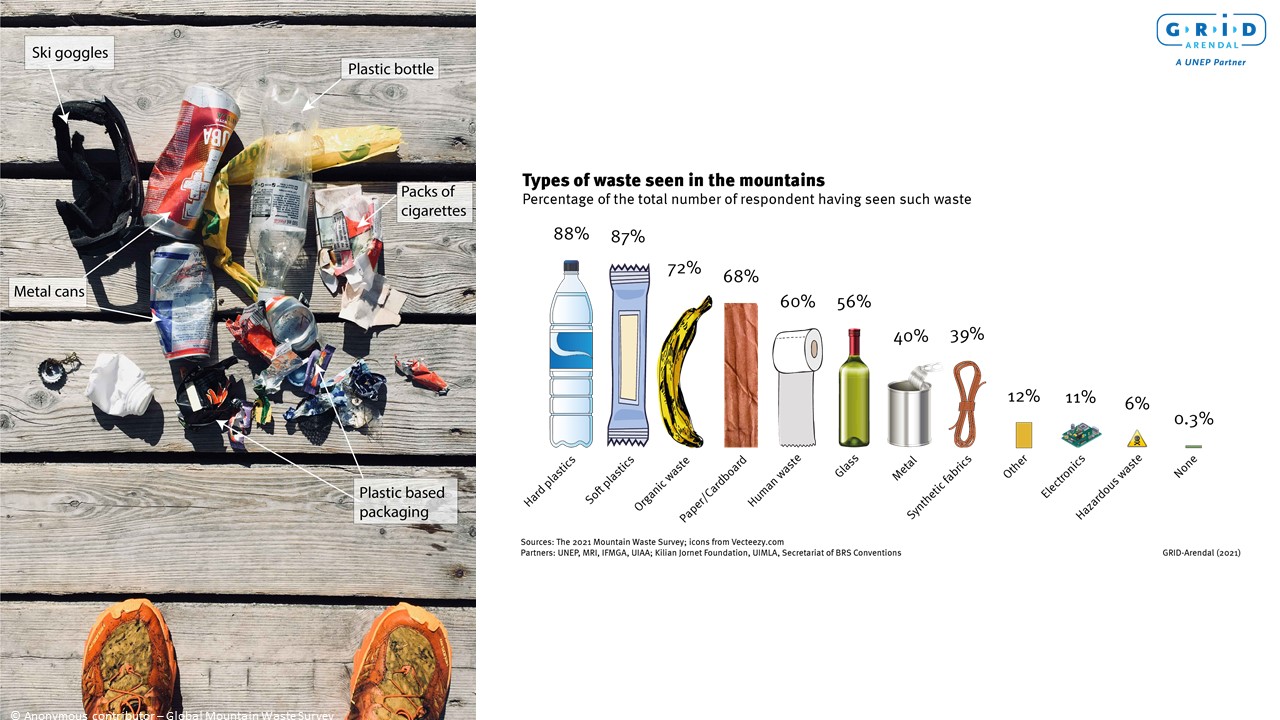 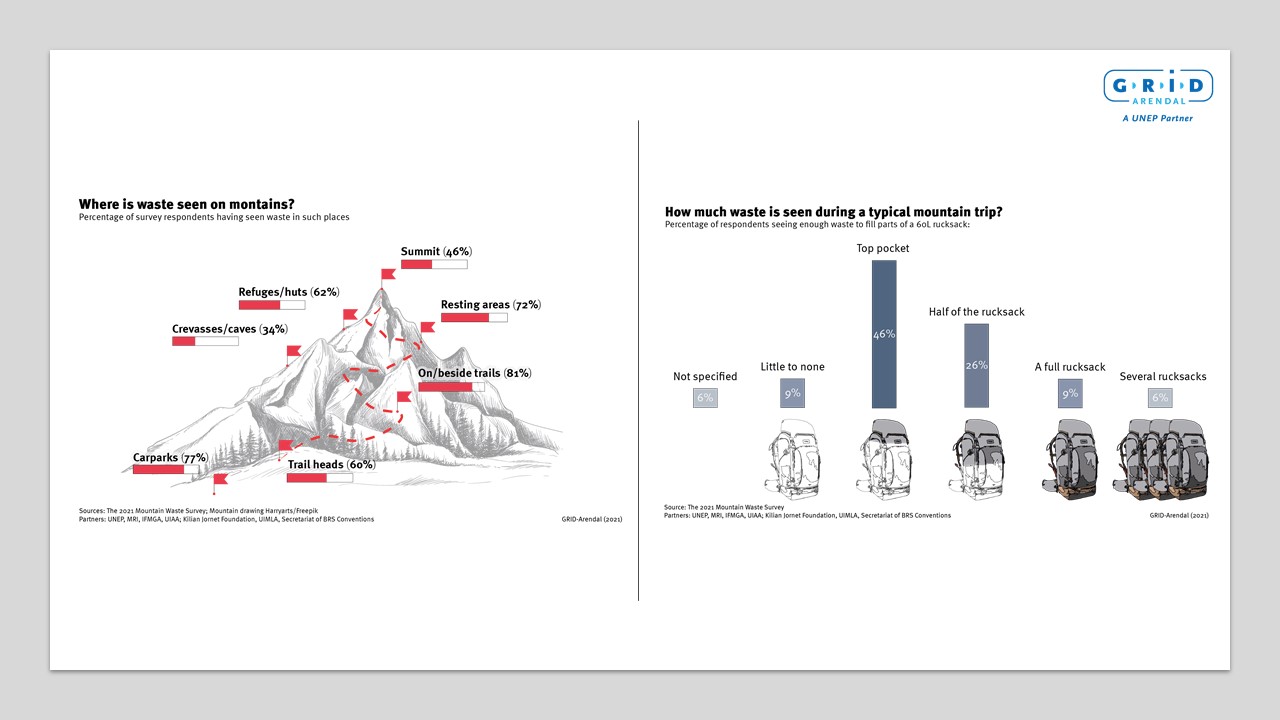 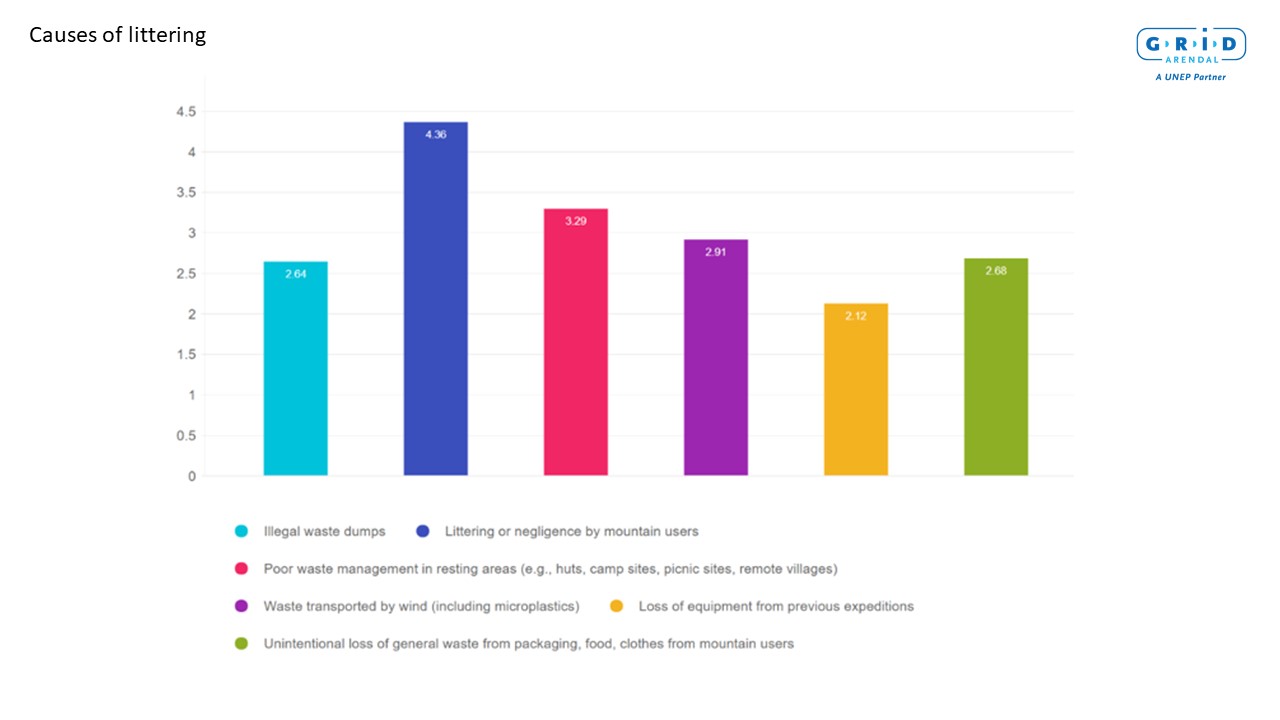 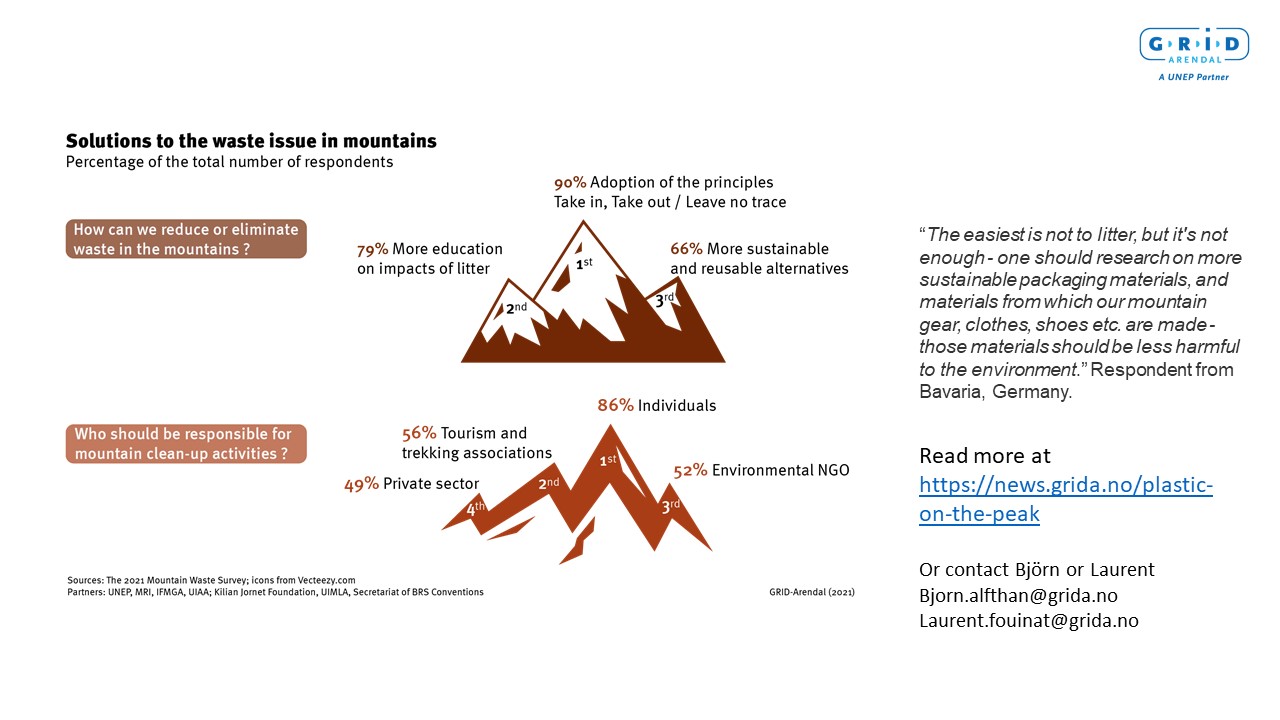 Trends, Challenges and Policy Recommendations to Address Plastic Waste in the Mountains | Jost Dittkrist, Secretariat of the Basel, Rotterdam and Stockholm Convention 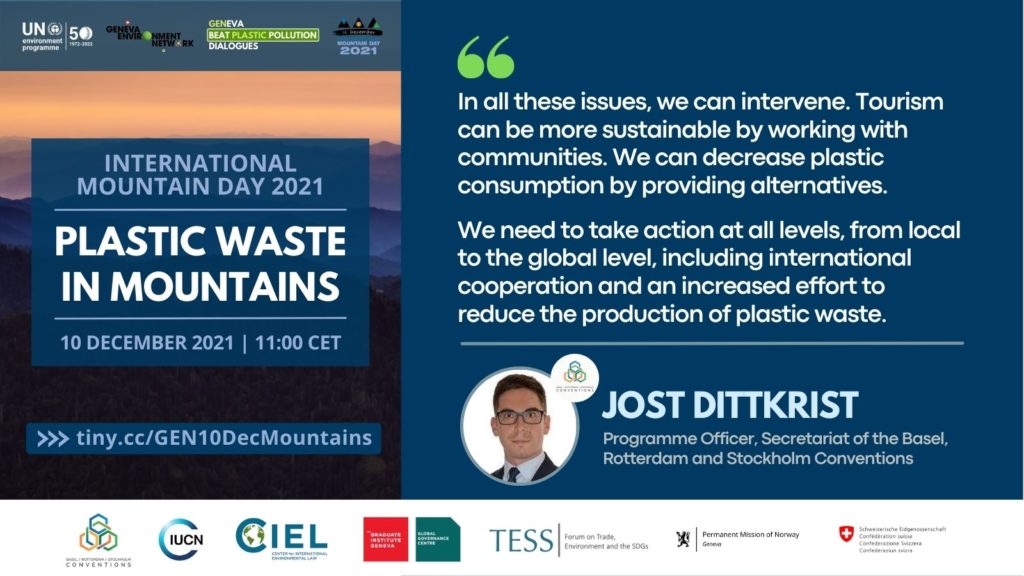 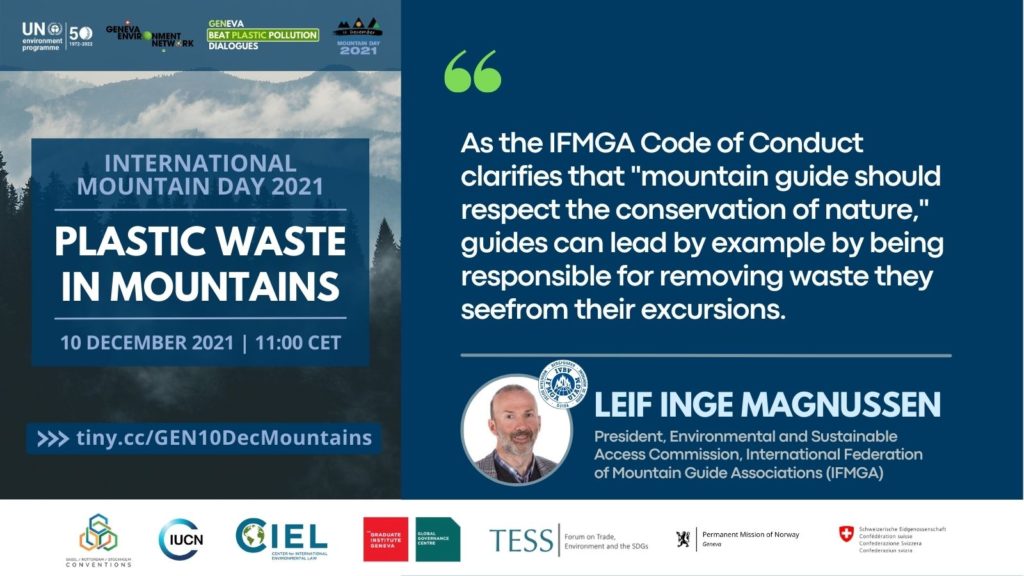 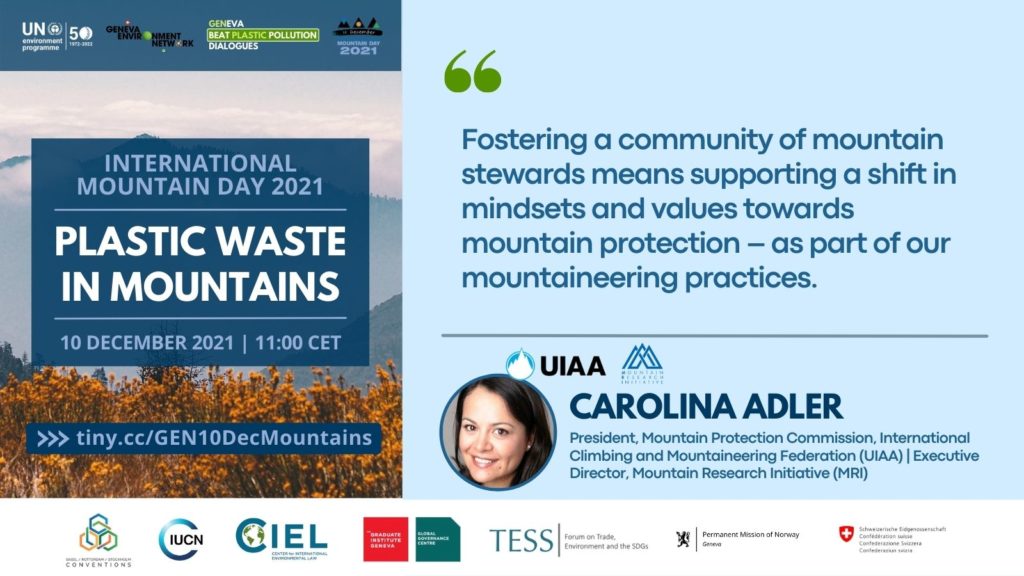 Success Stories from around the World in Addressing Plastic Waste in the Mountains | Lesya Nikolayeva, International Environmental Expert 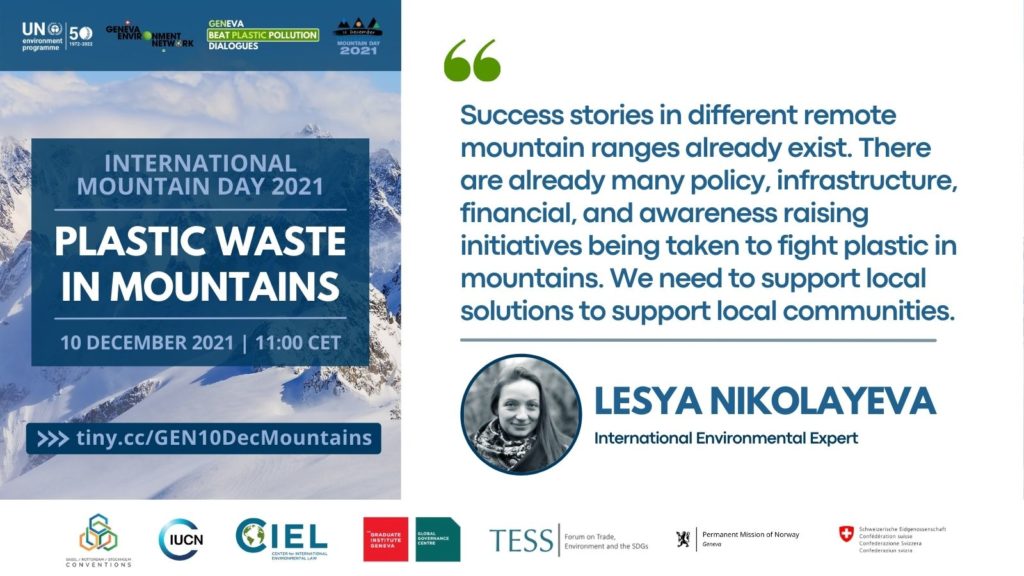 Acting Individually and Collectively to Address Plastic Pollution in the Mountains | Matthias Jurek, Secretariat of the Carpathian Convention 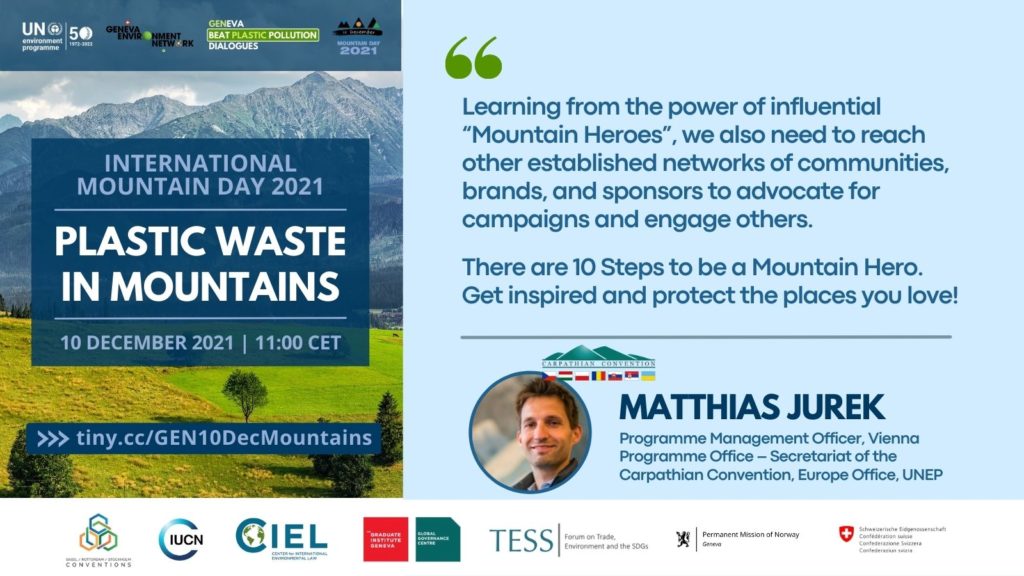 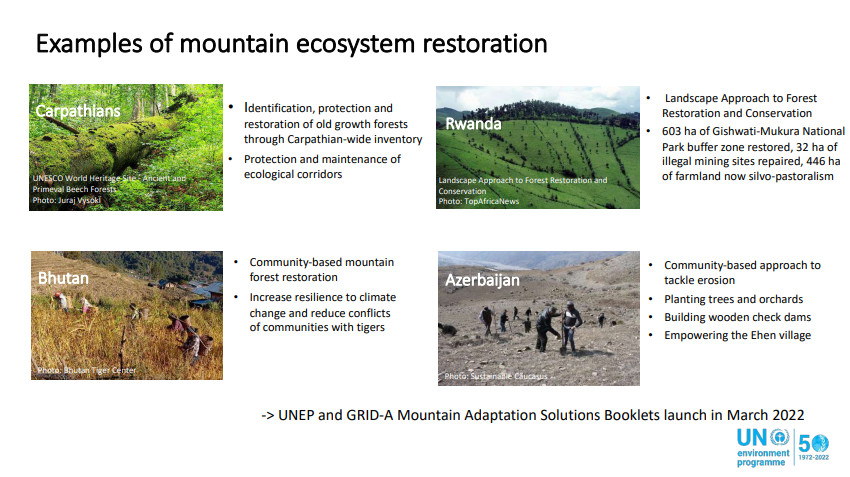 Q: Who pays or who should pay for these actions? It all comes down to money, at the end of the day.

Q: What are the status and the next steps of the global treaty on plastic pollution?