Plastic pollution is ubiquitous in the natural environment, with significant negative consequences on ecosystems and biodiversity. This page is part of our Plastics and the Environment series, a set of online resources on the plastics crisis, its impact on people and the environment, and international cooperation to address this global problem. They include resources and news from organizations in Geneva and beyond, including UN-system organizations and other IOs, governmental authorities, civil society organizations, academic institutions and journals, and renowned newspapers.

The world is facing a plastics crisis. Plastic pollution is found all around the globe. Plastics are negatively affecting people and the environment at each stage of their lifecycle – extraction of fossil fuel, production, manufacturing, use, recycling, and disposal. The impacts are felt in a wide range of areas, including on biodiversity, climate change, human health and human rights. This page focuses on the impacts of plastics on ecosystems and wildlife.

Plastics and Biodiversity at a Glance

Given the persistent nature of plastic and its toxicity, plastic pollution is a significant threat to biodiversity. It threatens ecosystems, animal and plant species, impeding their ability to deliver essential services to humanity. While the leakage of plastics into the ocean and the subsequent impacts of marine life has been most studied, plastic pollution also affect freshwater and terrestrial ecosystems.Indeed, plastic and chemical leakage into the environment may arise at various stage of the plastics life cycle, and the resulting pollutants are transported around the globe through air and oceans streams.

Environmental degradation occurs in the upstream, as extraction, fracking, production of plastics and chemical additives release substantial amounts of toxic substances into the air and contaminate the local environment. Disposal is also problematic: incineration of plastic waste releases toxic chemicals and micro- and nano-plastics into the air, while landfills contaminate soil and water. All these elements then impact biodiversity both locally and globally. 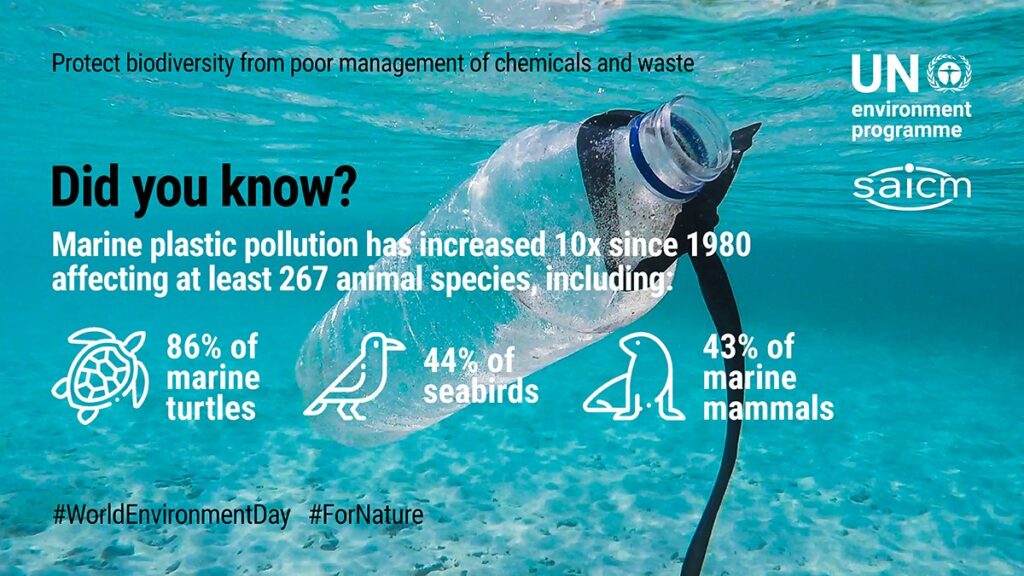 Plastics are everywhere now even in the deepest part of the oceans. Of the approximately 275 million metric tons of plastic waste produced annually, up to 12 million tons leak into oceans, wreaking havoc on livelihoods and ecosystems (CIEL, 2020) . The result is an estimated $13 billion in annual environmental damage to marine ecosystems. Plastic pollution affects marine life through various pathways, including ingestion, entanglement, toxic impacts, and more. In a 2016 report, the Secretariat of the Convention on Biological Diversity (CBD) recognized that marine debris is a globally significant stressor on the marine and coastal environment, as studies show that almost 800 marine species are affected by plastic pollution. 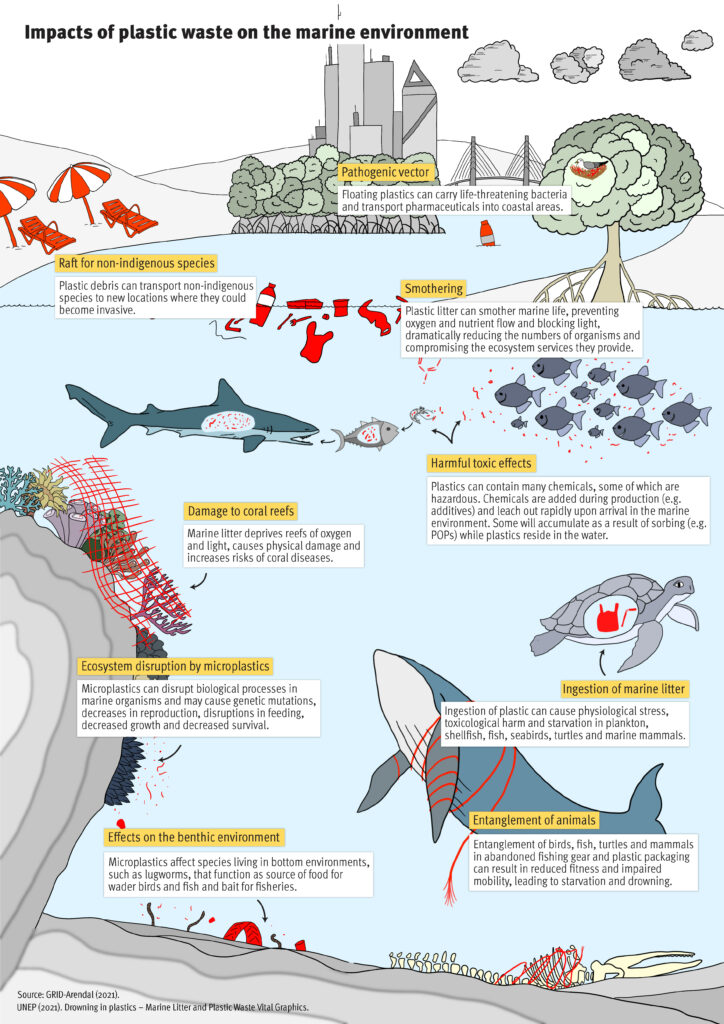 Impacts of plastic waste on the marine environment. Source: GRID-Arendal, 2021.

Further resources on the impacts of plastic pollution on marine ecosystems:

While ocean plastic pollution has for long been the center of media and public attention, scientific assessments are confirmed the detrimental impacts on plastic pollution on freshwater and soil, thus affecting ecosystems all over the globe.