The choices we make are creating new, emerging and larger risks. With increasing complexity and interaction between human, economic and political systems, risk becomes increasingly systemic. Hence, we need to reflect on the systemic nature of risk and on how we deal with it. We also need to improve our understanding of anthropogenic systems in nature to identify precursor signals and correlations to better prepare, anticipate and adapt to risks.

Disasters impact low- and middle-income countries disproportionately, particularly in terms of mortality, numbers of people injured, displaced and homeless, economic losses (as a percentage of GDP) and damage to critical infrastructure. We cannot eradicate poverty and hunger if we don’t step up investments in disaster risk reduction. In addition, without real action on climate in the next 10 years, extreme weather events will be overwhelming, especially for developing countries. Thus, international cooperation for developing countries through development aid and capacity building is essential to boost disaster resilience in the face of extreme weather events and other natural and man-made hazards.

13 October is the International Day for Disaster Risk Reduction and is an opportunity to acknowledge the progress being made toward reducing disaster risk and losses in lives, livelihoods and health. It is also a day to remind the world that disaster risk is man-made. The goal of the 2021 International day for disaster risk reduction is to provide an advocacy platform to highlight best practices and examples of international cooperation that have a positive impact on the lives of people who live in disaster-prone parts of the world, such as reducing the numbers of people affected by man-made and natural hazards.

The theme for 2021 is “International cooperation for developing countries to reduce their disaster risk and disaster losses.”  This is the sixth of the Sendai Seven targets and reminds us that international cooperation to developing  countries need to be substantially enhanced through adequate and sustainable support to complement national actions in order to achieve the target by 2030.

In summary, the seven targets focus on: 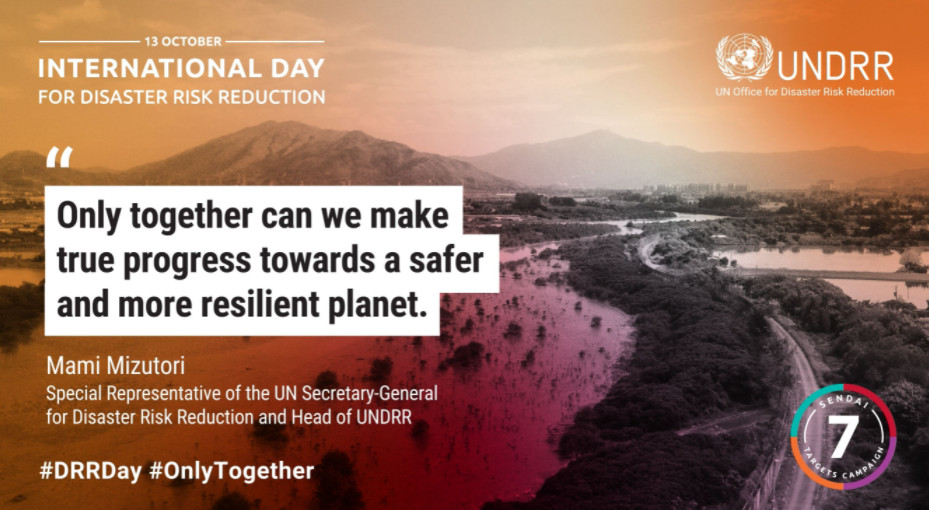 The Sendai Framework for Disaster Risk Reduction 2015-2030 (Sendai Framework) was the first major agreement of the post-2015 development agenda and provides Member States with concrete actions to protect development gains from the risk of disaster. It was endorsed by the UN General Assembly following the 2015 Third UN World Conference on Disaster Risk Reduction (WCDRR), and advocates for the “substantial reduction of disaster risk and losses in lives, livelihoods and health and in the economic, physical, social, cultural and environmental assets of persons, businesses, communities and countries.”

It also recognizes that the State has the primary role to reduce disaster risk but that responsibility should be shared with other stakeholders including local government, the private sector and other stakeholders.

The Sendai Framework works hand in hand with the other 2030 Agenda agreements, including The Paris Agreement on Climate Change, The Addis Ababa Action Agenda on Financing for Development, the New Urban Agenda, and ultimately the Sustainable Development Goals.

The Sendai Framework is the successor instrument to the Hyogo Framework for Action (HFA) 2005-2015: Building the Resilience of Nations and Communities to Disasters and is the outcome of stakeholder consultations initiated in March 2012 and inter-governmental negotiations held from July 2014 to March 2015, which were supported by the UNDRR upon the request of the UN General Assembly.

Disasters do not occur by accident – they are a result of the combined effects of hazards and vulnerable conditions. Disasters undermine hard-earned development gains and limit development achievements for future generations, with climate change expected to exacerbate the impacts of disasters globally.

The United Nations Environment Programme (UNEP) works to prevent and reduce the impacts of natural hazards, industrial accidents and conflicts on vulnerable communities and countries through sustainable natural resource management.

In the last decade, the role of ecosystems in disaster risk reduction (DRR) has received increased global attention. Sustainable ecosystem management for DRR is now recognized as a priority measure in the Sendai Framework for Disaster Risk Reduction.

The degradation of ecosystems – such as forests, wetlands, coastal and marine systems, and drylands – is now widely understood as a major driver of disaster risk and a key component of vulnerability to disasters.  For example, deforested slopes can cause more landslides, while reclaimed wetlands can worsen flooding, disasters on vulnerable communities and countries.

Over the past decade, disasters linked to natural hazards have exacted a significant toll on human lives, livelihoods, assets and economies. To prevent and reduce the impacts of disasters on vulnerable communities and countries through improved ecosystem management,  ecosystem-based, or Nature-based Solutions (NbS), can reduce disaster risk as well as provide co-benefits from  ecosystem services, which will contribute to livelihoods but also to building local resilience to disasters and climate change.

Organizations are listed in alphabetical order

The Geneva Centre for Security Policy (GCSP) is an international foundation serving a global community of individuals and organisation, aiming at advancing peace, security and international cooperation.

Helvetas is committed to a just world in which all men and women determine the course of their lives in dignity and security, using environmental resources in a sustainable manner.

The International Committee of the Red Cross (ICRC) is an independent, neutral organization ensuring humanitarian protection and assistance for victims of war and armed violence. It takes action in response to emergencies and promotes respect for international humanitarian law and its implementation in national law.

The Internal Displacement Monitoring Centre (IDMC) is the world’s definitive source of data and analysis on internal displacement.

The International Federation of Red Cross and Red Crescent Societies (IFRC) operates worldwide, helping people affected by conflict and armed violence and promoting the laws that protect victims of war.

The International Organisation for the Least Developed Countries (IOLDCs) strongly emphasizes on the need to eliminate the constrains and obstacles caused by the chronic conflict situations in the crisis-affected LDCs, which severely affects sustainable development in these countries.

IUCN’s Ecosystem-based approaches to disaster risk reduction (Eco-DRR) activities at the global level are coordinated by the IUCN Ecosystem Management Programme, and supported by the expertise of CEM members.

The Partnership for Environment and Disaster Risk Reduction (PEDRR) seeks to promote and scale-up implementation of ecosystem-based disaster risk reduction and ensure it is mainstreamed in development planning at global, national and local levels.

The Platform on Disaster Displacement is a State-led initiative working towards better protection for people displaced across borders in the context of disasters and climate change.

The United Nations Children’s Fund (UNICEF) promotes the rights and wellbeing of every child.

The United Nations Development Programme (UNDP) is the UN’s global development network, advocating for change and connecting countries to knowledge, experience and resources to help people build a better life.

United Nations Office for the Coordination of Humanitarian Affairs (OCHA)

The World Food Programme (WFP) is the leading humanitarian organization saving lives and changing lives, delivering food assistance in emergencies and working with communities to improve nutrition and build resilience.