Climate change is expected to have an unprecedented impact on people, ecosystems, food security, economies and peace. We rely on a stable climate to thrive and develop.

Climate Change is the defining issue of our time and we are at a defining moment. From shifting weather patterns that threaten food production, to rising sea levels that increase the risk of catastrophic flooding, the impacts of climate change are global in scope and unprecedented in scale. Climate-related risks to health, livelihoods, food security, water supply, human security, and economic growth have already been observed and are projected to increase with global warming of 1.5°C and increase further with 2°C. Without immediate and long-term actions today, adapting to these impacts in the future will be more difficult and costly.

The Intergovernmental Panel on Climate Change (IPCC) was set up by the World Meteorological Organization (WMO) and the United Nations Environment Programme (UNEP) to provide an objective source of scientific information. Both the IPCC and the WMO have their headquarters in Geneva while UNEP has a regional office. In 2013, the IPCC provided more clarity about the role of human activities in climate change when it released its Fifth Assessment Report. It is categorical in its conclusion: climate change is real and human activities are the main cause.

In addition, the World Health Organization (WHO), also headquartered in Geneva, indicates that, today, the world population is encountering unfamiliar human-induced changes in the lower and middle atmospheres and world-wide depletion of various other natural systems. Beyond the early recognition that such changes would affect economic activities, infrastructure and managed ecosystems, there is now recognition that global climate change poses risks to human population health. Climate change is emerging as a major theme in population health research, social policy development, and advocacy. Consideration of global climatic-environmental hazards to human health will become a central role in the sustainability transition debate.

Spearheaded by the International Labour Organization (ILO), it launched the Climate Action for Jobs Initiative by United Nations Secretary-General António Guterres. The initiative brings together governments, workers’ and employers’ organizations, international institutions, academia and civil society to place jobs at the heart of ambitious climate action and to promote a just transition.

Additionally, the International Federation of Red Cross and Red Crescent Societies (IFRC) held its first-ever virtual climate summit, Climate: Red, on 9-10 September 2020. It brought together members, staff, youth activists, government officials, experts, and indigenous leaders from around the world to discuss how to tackle the climate emergency.

Climate refugees are also on the increase and the Geneva-based Platform on Disaster Displacement is one of the organizations working on this issue, seen as one of the biggest humanitarian challenges this century.

Furthermore, the International Union for Conservation of Nature (IUCN) assesses the impacts of climate change on species and ecosystems. Through its work on ecosystem-based mitigation, adaptation and disaster risk reduction, it also highlights the important role of nature-based solutions to climate change. It also works to ensure that climate policy and action are gender-responsive, socially inclusive and take into account to the needs of the most vulnerable. 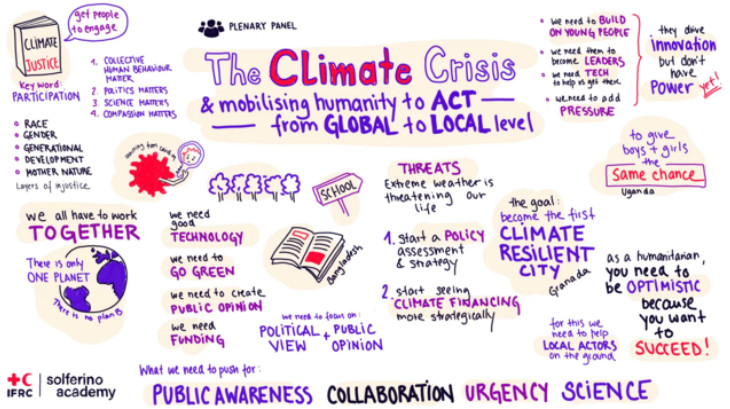 More on Climate in Geneva

In October 2018, the IPCC issued a special report on the impacts of global warming of 1.5°C, finding that limiting global warming to 1.5°C would require rapid, far-reaching and unprecedented changes in all aspects of society. With clear benefits to people and natural ecosystems, the report found that limiting global warming to 1.5°C compared to 2°C could go hand in hand with ensuring a more sustainable and equitable society. While previous estimates focused on estimating the damage if average temperatures were to rise by 2°C, this report shows that many of the adverse impacts of climate change will come at the 1.5°C mark. 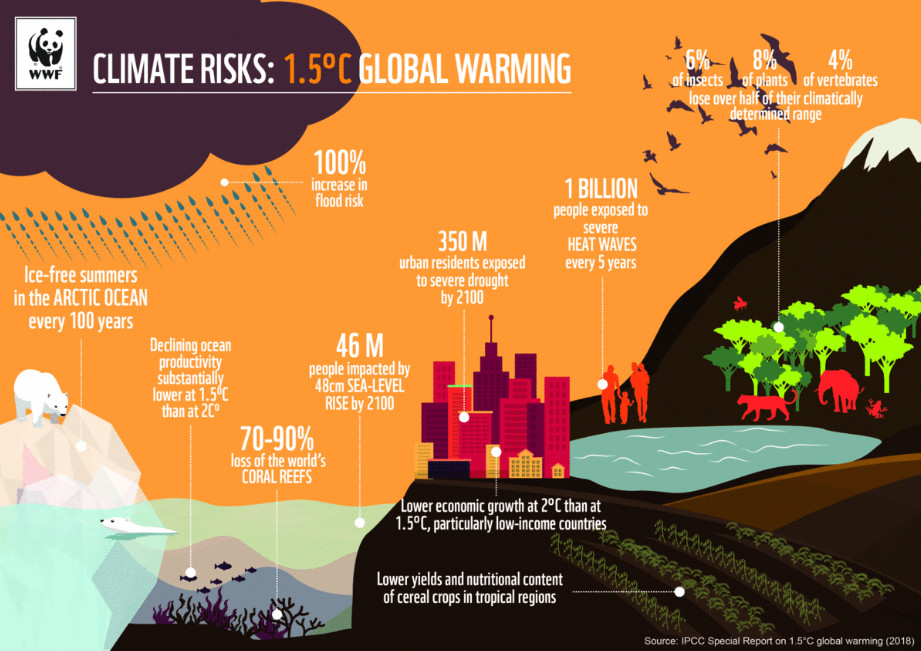 The Human Fingerprint on Greenhouse Gases

Greenhouse gases occur naturally and are essential to the survival of humans and millions of other living things, by keeping some of the sun’s warmth from reflecting back into space and making Earth livable. But after more than a century and a half of industrialization, deforestation, and large scale agriculture, quantities of greenhouse gases in the atmosphere have risen to record levels not seen in three million years. As populations, economies and standards of living grow, so does the cumulative level of greenhouse gas (GHGs) emissions.

There are some basic well-established scientific links:

According to the IPCC, any increase in global warming is projected to affect human health, with primarily negative consequences. Lower risks are projected at 1.5°C than at 2°C for heat-related morbidity and mortality and for ozone-related mortality if emissions needed for ozone formation remain high. Urban heat islands often amplify the impacts of heatwaves in cities. Risks from some vector-borne diseases, such as malaria and dengue fever, are projected to increase with warming from 1.5°C to 2°C, including potential shifts in their geographic range.

In the World Health Report 2002 of the WHO, it indicated that climate change was estimated to be responsible in 2000 for approximately 2.4% of worldwide diarrhea, and 6% of malaria in some middle-income countries. The WHO adds that the first detectable changes in human health may well be alterations in the geographic range (latitude and altitude) and seasonality of certain infectious diseases – including vector-borne infections such as malaria and dengue fever, and food-borne infections (e.g. salmonellosis) which peak in the warmer months. Warmer average temperatures combined with increased climatic variability would alter the pattern of exposure to thermal extremes and resultant health impacts, in both summer and winter. By contrast, the public health consequences of the disturbance of natural and managed food-producing ecosystems, rising sea-levels and population displacement for reasons of physical hazard, land loss, economic disruption and civil strife, may not become evident for up to several decades.

On land, impacts on biodiversity and ecosystems, including species loss and extinction, have already been observed with rising temperatures, increased ocean acidity and decreased ocean oxygen levels. These terrestrial, freshwater and coastal ecosystems provide value and services to humans.

Global warming of 1.5°C is projected to shift the ranges of many marine species to higher latitudes as well as increase the amount of damage to many ecosystems. It is also expected to drive the loss of coastal resources and reduce the productivity of fisheries and aquaculture (especially at low latitudes).

The Fifth Assessment Report provides a comprehensive assessment of sea level rise, and its causes, over the past few decades. It also estimates cumulative CO2 emissions since pre-industrial times and provides a CO2 budget for future emissions to limit warming to less than 2°C. About half of this maximum amount was already emitted by 2011. The report found that:

There is alarming evidence that important tipping points, leading to irreversible changes in major ecosystems and the planetary climate system, may already have been reached or passed. Ecosystems as diverse as the Amazon rainforest and the Arctic tundra, may be approaching thresholds of dramatic change through warming and drying. Mountain glaciers are in alarming retreat and the downstream effects of reduced water supply in the driest months will have repercussions that transcend generations.

Rapid, far-reaching and long-term transitions in energy, land use, infrastructure (including in transportation and buildings), and industrial systems are needed to limit climate change. According to the IPCC, such transitions are unprecedented in terms of scale, but not necessarily in terms of speed, and imply deep emissions reductions in all sectors, a wide portfolio of mitigation options and a significant upscaling of investments in those options.

In addition, global net human-caused emissions of carbon dioxide (CO2) would need to fall by about 45 percent from 2010 levels by 2030, reaching ‘net zero’ around 2050. This means that any remaining emissions would need to be balanced by removing CO2 from the air.

According to the ILO, if properly managed, climate change action can lead to more and better jobs. Both adaptation to climate change and measures to mitigate greenhouse gas (GHG) emissions offer opportunities to create new jobs, while securing existing ones. A transition to a low-carbon, greener economy will imply the creation of new jobs in environmentally friendly production processes and outputs, whereas other jobs will be at risk, in particular in those sectors with fewer options for a transition towards a more sustainable ways of production.

The UN family is at the forefront of the effort to save our planet. In 1992, its “Earth Summit” produced the United Nations Framework Convention on Climate Change (UNFCCC) as a first step in addressing the climate change problem. Today, it has near-universal membership. The 197 countries that have ratified the Convention are Parties to the Convention. The ultimate aim of the Convention is to prevent “dangerous” human interference with the climate system.

At the 21st Conference of the Parties in Paris in 2015, Parties to the UNFCCC reached a landmark agreement to combat climate change and to accelerate and intensify the actions and investments needed for a sustainable low carbon future. The Paris Agreement builds upon the Convention and – for the first time – brings all nations into a common cause to undertake ambitious efforts to combat climate change and adapt to its effects, with enhanced support to assist developing countries to do so. As such, it charts a new course in the global climate effort.

On 23 September 2019, Secretary-General António Guterres convened a Climate Summit to bring world leaders of governments, the private sector and civil society together to support the multilateral process and to increase and accelerate climate action and ambition.

(Did you know? From IUCN)

This visual representation of climate change (Transformation Map – interactive version available online via
intelligence.weforum.org) uses the collective intelligence of the World Economic Forum and provides an overview and the key trends affecting it, along with summaries and links to the latest research and analysis on each of the trends.

Expert Forum for Producers and Users of Climate Change-Related Statistics

Climate Change and Water in Mountains - A Global Concern